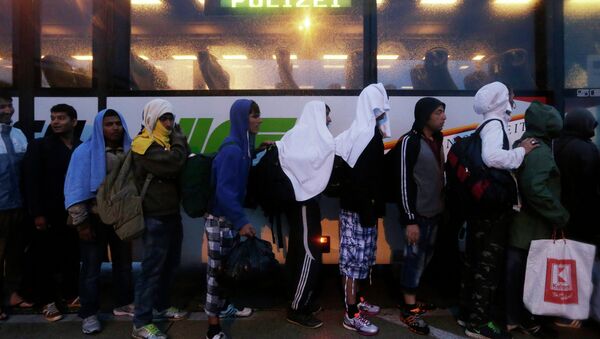 A Russian woman residing in Munich, Germany kept a diary for a one year period in which she shared her observations and thoughts about life in Germany amid the ongoing refugee crisis.

Galina Ivanova wrote what she saw on German television and in her everyday life since the beginning of the migrant crisis in Europe. She compiled the information she gathered in chronological order starting from January 2015.

According to the woman’s diary, obtained by Russian newspaper Komsomolskaya Pravda, in January 2015 German internet was abuzz over the government's statement on the need for immigrants from all over the planet. Preference was given to young Muslims from Africa and the Middle East: the Bundestag’s statement referred to the “strong arms, designed to save the German economy.”

“Where will all the less educated people who do not speak German work?” If someone would raise such a point they would instantly be labelled “racist” and “Islamophobic,” wrote the woman.

Berlin Cannot Take 'Whole World to Germany' Amid Migrant Crisis
She further mentions that unemployment in Germany is already at 30 percent, where will those mythical jobs come from?

In the same month the Catholic Church in Germany decided to abandon the practice of infant baptism. The reason: it is impossible to impose individual faith, let the baby grow and decide for itself.

In the same period, Germany proposed to legalize marijuana and hashish. Some of the internet comments were “Wow! Problem solved! Jobs for refugees will be provided! All the illegal drug dealers will become private entrepreneurs and other refugees will work on the marijuana plantations!”

According to the woman’s account, when she went to Hamburg to take exams, she saw crowds of Africans in fashionable vintage clothing with the latest models of smartphones and gadgets.

The people in Munich held demonstrations in support of the government’s migration policy. The protesters chanted how they want to take more Muslim refugees. Who are the protesters? Many are refugees themselves, many amongst them young Africans.

Many school cafeterias in Germany have banned serving pork sausage, pate and has forbidden to even bring these sandwiches from home. The schools canceled the lessons of religion and renamed the Christmas holidays as ‘winter break.’ Many companies ask their employees not to eat or drink during Ramadan so as not to upset Muslims.

According to the compiled documents crime is on the rise in Germany. The amount of police officers on the road is higher than ever. According to Ivanova, "Recently, The Vaterland abandoned the slogan 'Germany for the Germans,' now we live under the banner of 'Country without Borders, Germany — a country of immigrants'" (Deutschland ist Einwanderungsland). "Germans believe any resident in Germany, has the rights of those born here," the document explained.

Despite all these difficulties and challenges that Germany has to face with the current refugee crisis, when someone in Germany raises his voice against this they are instantly labelled as ‘Nazis’ or ‘inhuman.'