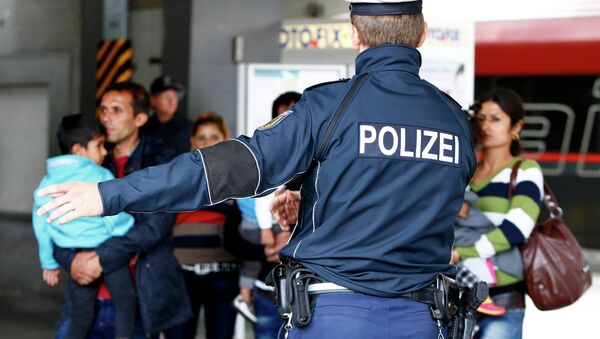 Helping refugees fleeing conflicts in their home countries is a moral obligation of European states, and of Germany in particular, an ex-ambassador of Germany to Russia told Sputnik on Tuesday.

MOSCOW (Sputnik), Anastasia Levchenko — Von Studnitz, the honorary president of the German-Russian Forum, said that if some EU states refused to accept the proposed mandatory quota system for relocating refugees expected to be discussed on Wednesday at the European Commission, it would be difficult for Germany to shoulder the burden on its own.

"The question is that they are people who are in an absolute dire need, who have lost everything — homes and families. Simply, you have to help people who are in dire need, that's the first thing to do," Ernst-Joerg von Studnitz, who served as the ambassador extraordinary and plenipotentiary of Germany to Russia in 1995-2001, said.

"We cannot force the others to do what they do not want to do. On the other hand, we cannot take the whole world to our country. It's very difficult to draw a line," the diplomat stressed.

Germany Needs Migrants as 'Slaves' - Marine Le Pen
Europe is experiencing a large-scale migration crisis, as thousands of refugees attempt to cross into the bloc, fleeing violence and poverty in their home countries.

According to the EU external border protection agency, Frontex, the number of refugees detected at EU borders between January and July stands at 340,000, three times higher than during the same period in the previous year.

On Wednesday, European Commission President Jean-Claude Juncker is expected to present new proposals for "a fair distribution" of refugees within the European Union, adding an extra 120,000 people to the group of 40,000 asylum seekers the Commission had previously proposed to relocate.

Germany should establish a screening system to identify highly qualified migrants, that would allow those whose skills could fill gaps in the country’s labor market to stay, Ernst-Joerg von Studnitz believes.

"What politicians are trying to do now is to make differentiation between asylum seekers and people who come for economic personal needs."

Migrant Crisis Will Tear Down Shaky EU - German Media
He added that those "who are being prosecuted, who have threats to their life and families" would be granted asylum while others would have to undergo a special selection process before being admitted to German society.

"I think we will eventually establish the system that allows to do the screening of those who we are taking or not taking in their countries. And not in Germany. That's a longer range perspective, but we will, in the end, not take everyone in, and then sort them out and see who can stay and who has to come back," Von Studnitz, the honorary president of the German-Russian Forum, stressed.

He pointed out that a similar scheme was in place in the 1960s and 1970s, when Germany was actively attracting Turkish workers.

"It was the task of the consulates and embassies to screen those people and find out who was capable of working in Germany and who not. Germany probably has to come back to such system again," Von Studnitz said, adding that Germany have a deficit of about 50,000 — 60,000 engineers, and qualified migrants could occupy this niche.