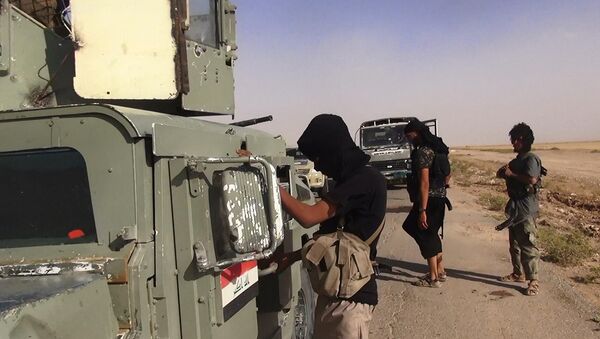 ISIL Uses Chemical Weapons in Attack on Northeast Syria
MOSCOW (Sputnik) — Islamic State terrorists have abducted 127 children in the militant-held Iraqi city of Mosul over the course of the past few days, a spokesman for the Kurdistan Democratic Party said.

“The organization kidnapped, during the past few days, 127 children aged between 11 to 15 years. They send children to special camps to train them on the use of weapons and implementation of terrorist operations,” Iraqi News quoted Saeed Mamouzini as saying.

According to the media outlet, the father of one of the children killed two of the kidnappers in an attempt to prevent them from taking his child.

"ISIS had kidnapped hundreds of children during the last period, and they were trained to carry out suicide operations," Mamouzini was quoted as saying.

World
Dream Down the Drain: Wannabe Jihadist Gets Toilet Duty Instead of Holy War
ISIL is an extremist religious group that operates mainly in Iraq and Syria where it has captured large territories. Mosul, the second largest city in Iraq, has been under ISIL control since June 2014.

In late May, ISIL militants kidnapped some 500 children in two Iraqi provinces, taking them to their bases in Iraq and Syria for combat training.

In July, some 180 children were kidnapped in or around Mosul.

Although the exact number of children currently fighting for ISIL is unknown, the militant group is estimated to have recruited more than 1,100 child soldiers since the beginning of the year.