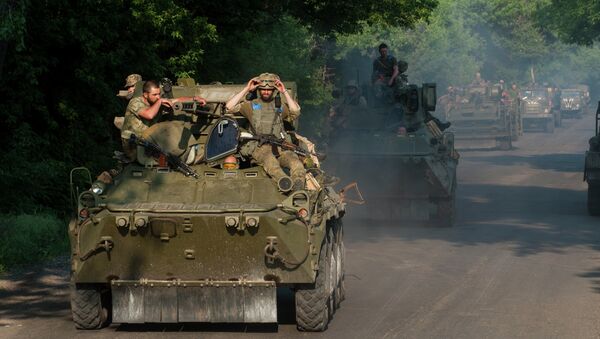 © AP Photo / Evgeniy Maloletka
Subscribe
Even if Kiev signs the document on the withdrawal of heavy artillery with a caliber below 100-milimeter from the line of contact in Donbass, Ukrainian forces will unlikely follow it fully, a Donetsk political expert Kirill Cherkashin said.

Donetsk Hopes to Sign Weapons Under 100-mm Calibre Pullback Deal on Tuesday
There is a chance that the agreement to withdraw weaponry from the contact line in Donbass will be achieved, but it will hardly be followed rigorously, Cherkashin argued.

Members of the Security subgroup that comprises representatives from Ukraine, Russia and OSCE in Minsk have approved a proposal to withdraw weaponry of under 100-mm caliber, along with tanks in Donbass, an unnamed source that is close to negotiators told RIA Novosti.

The draft of the project will be presented to the contact group members in Minsk on September 8. However, the leaders of self-proclaimed republics won’t attend the meeting, the representative of DPR Denis Pushilin told Ria Novosti, but he noted that the document can be signed without the actual presence of the heads of both the DPR and LPR.

Although the agreement could mark the possible ending of the conflict, Cherkashin said this perspective doubtful to him.

“Anything can be expected from the Ukrainian side; they might sign the paper, or, they might not,” he said to RIA Novosti. “But as practice shows, even if agreement was done, Kiev would doubtfully follow it unfailingly.”

First NATO Office to Be Opened in Ukraine - Media
In April 2014, Ukrainian authorities launched a military operation against the self-proclaimed DPR and LPR. So far, according to the latest UN data, over 6.8 thousand have died during the conflict.

The settlement of the Donbass conflict has been discussed numerous times, including within the contact group meeting in Minsk. Three proposal documents have been applied since September of last year intended to provide guidelines for a de-escalation of the violence.