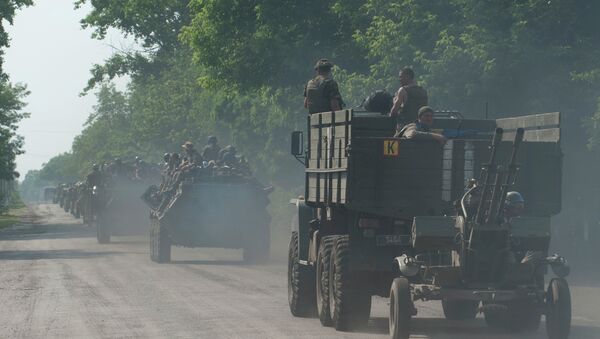 © AP Photo / Evgeniy Maloletka
Subscribe
Interim speaker of the self-proclaimed Donetsk People’s Republic People’s Council Denis Pushilin said that an agreement on the withdrawal of weapons under 100-mm calibre by the Kiev-led forces and the Donbass militias is likely to be signed during a Contact Group meeting later Tuesday.

DONETSK (Sputnik) – An agreement on the withdrawal of weapons under 100-mm calibre by the Kiev-led forces and the Donbass militias is likely to be signed during a Contact Group meeting later Tuesday, interim speaker of the self-proclaimed Donetsk People’s Republic People’s Council Denis Pushilin said.

"There is big hope that the [issue] with the document on withdrawal of weapons under 100-mm calibre will be put to an end at a meeting of the security subgroup, it is likely that the document will be initialled," Pushilin said, as quoted by the Donetsk News Agency.

According to Pushilin, signing of the agreement will be an important step to resolving the conflict in eastern Ukraine.

OSCE Mission in Ukraine Does Not Confirm Full Pullback of Arms
The Trilateral Contact Group on the settlement of the crisis in Ukraine, which comprises representatives from Ukraine, Russia and the Organization for Security and Co-operation in Europe (OSCE), was set up in 2014 in a bid to promote a direct dialogue between the conflicting parties.

The formation of subgroups of the Contact Group on political, economic, humanitarian and security issues was stipulated by the Minsk ceasefire agreement, worked out in February by the leaders of Russia, Ukraine, France and Germany.

The Minsk deal also stipulated a ceasefire, weaponry withdrawals from the contact line in eastern Ukraine and prisoner swaps, among other measures. Both Kiev-led forces and the Donbass militias have accused each other of breaking the truce.

The security subgroup started working on a draft document on the withdrawal of weapons with a calibre of less than 100mm in August.