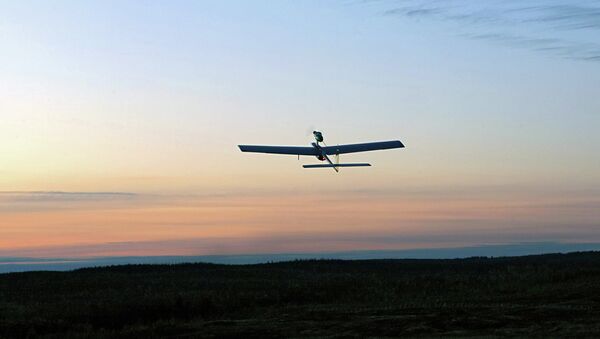 © Sputnik / Alexei Danichev
/
Go to the mediabank
Subscribe
International
India
Africa
In just a month and half, the ‘Luch’ Russian design bureau printed and put together a functioning 3D-printed unmanned aerial vehicle.

The unique device has already been checked for operability in test flights, the Luch’s CEO Michael Shebakpolsky told RIA Novosti.

It was created in cooperation with the Rybinsk engine building plant ‘Saturn’ and the state corporation ‘Rostec.’

“The UAV has been designed specifically for 3D-printers. There are still many things to work on: the size of the apparatus, materials for three-dimensional printing and domestic equipment. This UAV’s wingspan is 2.5 meters, for the payload a ‘go- pro’ camera was used,” Mikhail Shebakpolsky said.

Science & Tech
Start the Press: Russian Academic Launches DIY Course in Making 3D Printer
The printing of drones using the 3D technology is actively being done around the world. For example, last July, it was reported that Israel purchased a 3D printer from the United States for just a few thousand dollars. It was allegedly successfully tested at a military base in Tel Nof for printing parts for the UAVs.

However, it was reported that the Israeli technology allows printing of only the plastic parts of the aircraft, so to create functioning details of the UAV usual methods were applied.

Luch’s CEO added that in Russia the 3D-printers currently in use were produced in the West. But at the end of this year Russia will start production of its own 3D printers.

The Russian company “Mako Technologies” will open its own design office and launch educational programs and courses on 3D-modeling.