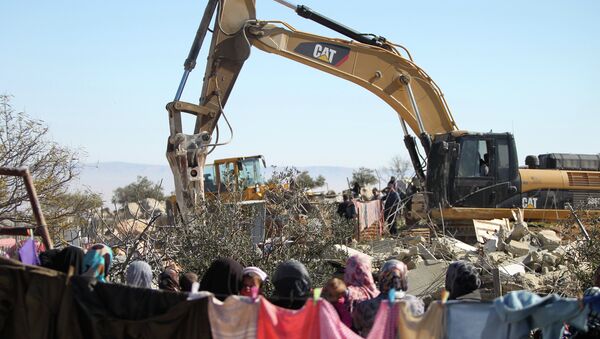 © AFP 2022 / Hazem Bader
Subscribe
Israel has plans to demolish 17,000 Palestinian-owned buildings located on mostly occupied land of the West Bank, a UN report has revealed, with concerns the demolitions will cause poverty and leave many families in a "state of chronic uncertainty".

A report from the UN Office for the Coordination of Humanitarian Affairs (OCHA) concluded that as a result of new and outstanding demolition orders, up to 17,000 structures, including houses, sheds and animal shelters could be knocked down, despite the fact that 77 percent of the buildings are located on privately owned Palestinian land.

The structures under the threat of demolition are located in Area C, a zone in the occupied Palestinian territory of the West Bank where the state of Israel retains full security and administrative control.

Around 300,000 Palestinians live in Area C, which covers 60 percent of the West Bank, and is also the location of many Israeli settlements with a population of around 360,000 — which are deemed illegal under international law.

Close to 4,500 demolition orders are to affect the land of Palestinian Bedouins, who human rights activists say are under threat of losing their homes in exchange for more Jewish settlements in the West Bank.

The UN report raised concerns about the impacts such proposed demolitions might have on Palestinians living in affected areas.

"These orders heighten the vulnerability of thousands of poor Palestinian households, some of whom are at imminent risk of forcible displacement." 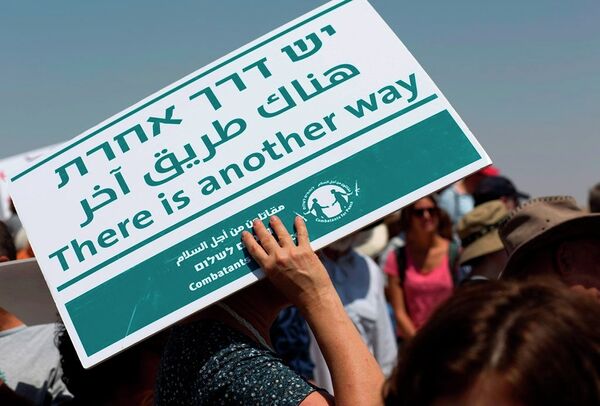 A female foreign peace activist covers her head from the sun with a banner during a demonstration, at the village of Susiya, south of the West Bank city of Hebron, Friday, July 24, 2015.
© AP Photo / Nasser Nasser

It also pointed out that the manner in which demolition orders are handled adds to the suffering of locals.

"Structures built without permits are regularly served with demolition orders. While only a minority of the orders issued are executed, these orders do not expire and leave affected households in a state of chronic uncertainty and threat," the report found.

"Where the orders have been implemented, they have resulted in displacement and disruption of livelihoods, the entrenchment of poverty and increased aid dependency."

While Israeli officials claim that the buildings are under threat as a result of not having the correct planning permission, others point out the extreme difficulty many face in trying to secure proper construction permits.

According to data from the governing body in charge of affairs in the West Bank — the Israeli Civil Administration — Palestinians submitted 2,020 applications for building permits in Area C between 2010 and 2014, while only 33 were approved.

The report said that planning and zoning rules made "it is nearly impossible for Palestinians to obtain building permits in most of Area C."

Israeli officials have been accused of widespread discrimination over their treatment of Palestinians in Area C, with only one percent of the zone legally earmarked for Palestinian development.

This is contrasted to the 235 illegal Jewish settlements and outposts that have been constructed in the area in recent years. Many critics have argued that while authorities are harshly critical of Palestinian constructions, they turn a blind eye to any potential breaches in Jewish settlements.

The report follows international outrage over Israeli plans to demolish the West Bank village of Khirbet Susiya in July, with EU officials specifically asking Israel to stop the "forced transfer of population and demolition of Palestinian housing" in the area.