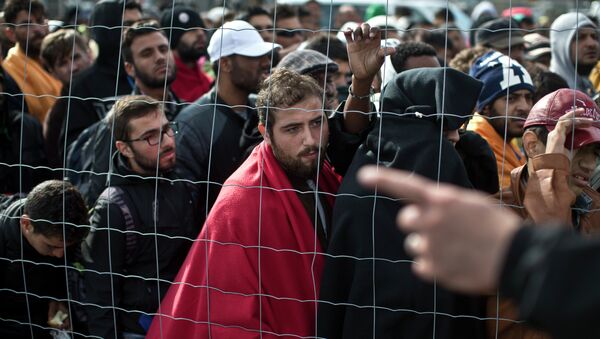 SZEGED (Hungary) (Sputnik) – An overwhelming majority of migrants coming to Hungary via Serbia have no IDs, and authorities have no other way of verifying their identity apart from taking their word, a border county police spokesman said Monday.

"They have no passports. Perhaps their documents are being taken away when they want to leave their country, or they lose them along the way," Maj. Szabolcs Szenti told RIA Novosti.

As a result, the police in the southeastern county of Csongrad, where the town of Szeged is located, have to take the migrants’ word to verify their identities.

"Seventy to 80 percent of them say they have arrived from Syria. We receive migrants from 65 countries, starting with Mali, the Philippines, Pakistan and Afghanistan, and ending with Russia," Szenti, Csongrad County Police Department spokesman, said.

New arrivals are taken less than a mile away from the border to have their fingerprints scanned and photos taken.

Undocumented Immigration to Latvia Generates Higher Costs
The path to the registration point is unguarded and migrants are able to deviate from the route, which Szenti said many migrants take advantage of, seeking refuge in more affluent EU member states.

"If migrants escape from us at the border, we catch them later. They are not aware of a second and third ‘belts.’ For example, towns are being patrolled and cars are being checked on highways," the major said.

All but 5 percent of all migrants arriving in Csongrad are registered, according to official estimates, but the police spokesman said it was impossible to control their flow fully. "No country in the world can do it," Szenti argued.

The officer said there were around 700 people at the registration point at the time of speaking. They were periodically taken to a nearby village of Roszke, where police could hold up migrants for up to 36 hours.

Afterwards, Szenti said the aspiring refugees would be handed over to migration service officials and taken to one of several refugee camps located throughout the country. He said at least two of these temporary holding units accommodated nearly 2,000 people.

Hungary is one of a handful EU member states at the epicenter of a migration crisis that has seen an unprecedented flow of migrants from hard-hit North African and Middle Eastern nations.

Despite a recently constructed Serbian-Hungarian border fence, tougher legislation and other preventive measures, Hungary continues to serve as a transit route for migrants hoping to travel further north into Germany.