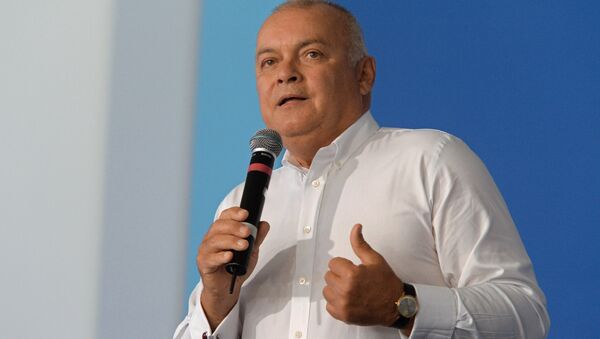 UK Bank Blocks Payment to RT Amid Sanctions on Rossiya Segodnya's Kiselev
BRUSSELS (Sputnik) – In one of the lawsuit’s arguments cited by EUR-Lex, Dmitry Kiselev claims the restrictive measures punish him for the political views that he has expressed as a journalist and a commentator.

"They also restrict his ability to exercise his right to freedom of expression as well as the operation of the news agency," the publication stated. The action was brought against the Council of the European Union on May 22.

Another argument says the Council’s reasoning behind including Kiselev in its list is "excessively vague and fails to identify the actual and specific reason."

The director general further argues he was not provided concrete evidence in support of the Council’s sanctions and adds that the restriction was adopted in breach of the EU/Russia Partnership and Cooperation Agreement.

Incorrect Documents Led to Rossiya Segodnya Registration Refusal in Latvia
As a journalist and director of a media company, Kiselev "does not have the requisite influence or concrete impact on, and responsibility, for the situation in Ukraine," EUR-Lex cited a fifth argument.

Kiselev’s final plea claims the Council "relied on an illegal measure" in sanctioning him.

The director general of Rossiya Segodnya confirmed his intention to appeal the EU decision to RIA Novosti.

"Yes, we want to challenge the EU’s unjustified decisions infringing on the freedom of speech. I believe this precedent should be abolished in the name of Europe itself," he said.

The European Union, the United States and their allies sanctioned Kiselev, along with dozens of Russian individuals, in relation to the Ukrainian conflict. Kiselev equated the EU measures to "sanctions on freedom of speech."