Refugees Protest in Hungarian Camp, Demand to Be Sent to Germany - Witness 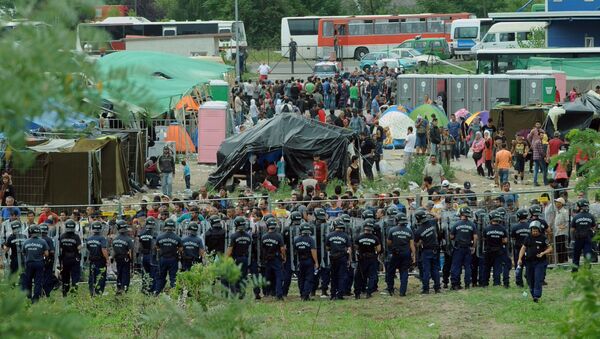 Around 50 refugees are protesting in a camp in southern Hungary, demanding to be sent to Germany, witnesses told RIA Novosti on Sunday.

Migrants in Hungary Reject Food, Water Offered by Police
BUDAPEST (Sputnik) – The Hunagrian authorities are not letting the refugees leave the camp and go through the country. The asylum seekers have been protesting by sitting outside of the camp, demanding that Budapest send them to Western Europe.

After almost a week of unrest outside of Budapest’s main train station, as well as several breakouts from refugee camps, Hungary let thousands of refugees board buses and go to Austria and Germany on Friday.

The European Union, including Hungary, has been struggling with a massive crisis as tens of thousands of migrants try to enter the bloc, fleeing violence in their home countries, particularly in the Middle East and North Africa.

Hungary has found itself at the epicenter of an unprecedented crisis, with 156,000 undocumented migrants having arrived in the country so far this year.

On August 24, Germany announced that it would not deport any Syrian migrants, even if they has first arrived to other EU state, despite the Dublin Protocol. The move drew criticism in the so-called transit countries, such as Hungary, which believed it would encourage even more migrants to make the perilous journey.