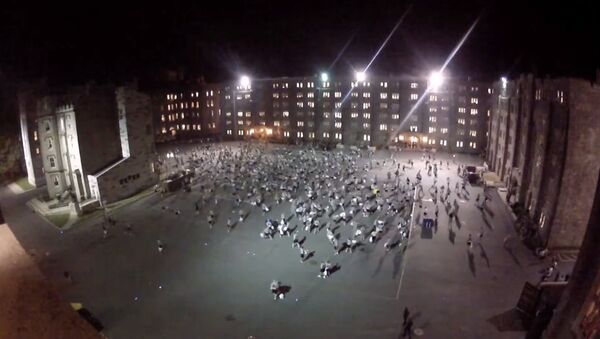 © Photo : Youtube / Jonathan Hunter
Subscribe
The annual pillow fight at West Point Military Academy in the US got ugly, when scores of cadets sustained concussions and other injuries as a result of overzealous pillow attacks.

Army to New Yorkers: We Lost a Missile, Can You Help Us Find It?
The traditional annual freshman pillow fight at West Point Military Academy in New York State got out of hand last month, when 30 cadets were injured, 24 of whom sustained concussions from pillow blows.

Other cadets suffered dislocated shoulders and one suffered a broken leg in the brawl, which took place on August 20 at the academy, which counts Robert E. Lee, Douglas MacArthur, George S. Custer and Ulysses S. Grant among its famous graduates, and touts itself as providing "a 47-month leader-development program steeped in academic rigor, military discipline, and physical challenges, all built upon a moral-ethical foundation."

The annual pillow fight is carried out by cadets to mark the end of grueling summer training. However, according to reports, this year's intake, who will graduate as US army officers in 2019, swung pillowcases packed with hard objects, which caused the injuries.

"West Point applauds the cadets' desire to build esprit and regrets the injuries to our cadets," said West Point spokesman Lt. Col. Christopher Kasker, who added that the injured cadets have since returned to duty.

"We are conducting appropriate investigations into the causes of the injuries."