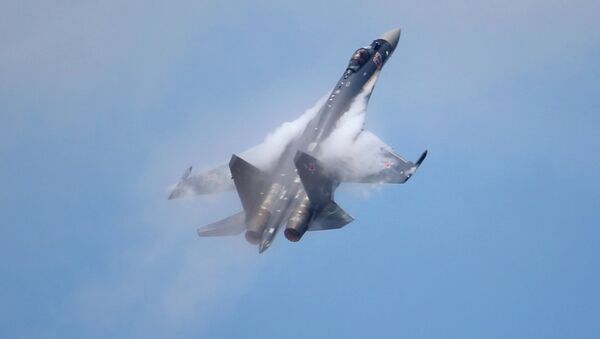 © AP Photo / Francois Mori
Subscribe
It is only natural that Indonesia has decided to purchase Russian-made Su-35 multirole fighters, according to independent military expert Alexander Yermakov.

In an interview with the Russian defense news website defendingrussia.com, independent military expert Alexander Yermakov said that it is no wonder Indonesia has finally decided to buy a squadron of Su-35 Russian multirole fighter jets.

The Su-35 is a 4++ generation aircraft which uses fifth generation technology, which makes the plane superior to all other 4th generation fighters now under development worldwide.

The Su-35s are expected to be added to Indonesian Air Forces' existing fleet of five Su-27SK and eleven Su-30MK fighters.

Importantly, a whole array of planes from other countries took part in the competition to supply their aircraft to Indonesia.

Commenting on Indonesia's decision to buy the Su-30s, Alexander Yermakov explained that these heavy Russian fighters fully suit Indonesia's geographic characteristics and the country's drive to boost its regional clout.

Indonesia to make a contract with RUS on buying SU-35 in the end of Sep Ind MOD "SU-35 is easier to maintain"-> @RIA pic.twitter.com/zxQUTIiUsM

According to him, this country of 255 million which is spread 5,000 kilometers across an archipelago of thousands of islands has a poorly developed airfield network.

This problem will certainly be resolved after Indonesia acquires the Su-35s, which has a ferry range of at least 4,500 meters, Yermakov said.

Russia's Su-35 Fighter: A Trump Card Up Beijing's Sleeve in South China Sea
In addition, these planes have great potential to destroy targets at sea, thanks to Russia developing advanced aircraft-based anti-ship missiles, according to Yermakov.

He also pointed to the fact that the Sukhoi fighters have always been the flagship planes of the Indonesia Air Force, which will soon get what Yermakov touted as potentially the best unique and potentially best aircraft in the region.

Indonesian Defense Minister Ryamizard Ryacudu has, meanwhile, said that the contract between Russia and Indonesia will be signed later in September. According to him, Jakarta will buy the Su-35 jets in several stages, depending on the country's financial capacity.