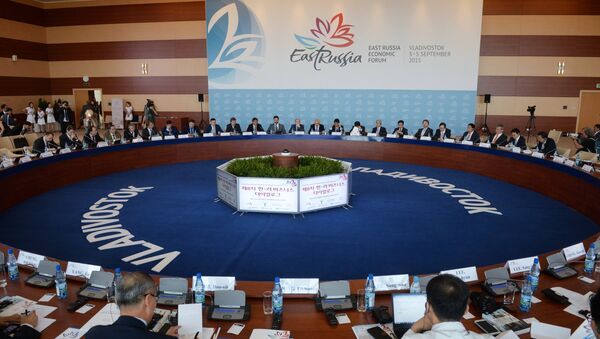 Over 80 contracts have been signed at Eastern Economic Forum (EEF), of different scale and importance to the Russian and world economy.

VLADIVOSTOK (Sputnik), Alexander Mosesov – The three-day international Eastern Economic Forum (EEF) in the Russian city of Vladivostok wrapped up on Saturday with unexpectedly high attendance and amount of deals signed worth almost $19 billion.

Russia's Special Economic Zones First Step of Overall Economic Reforms
The Forum was attended by 2,500 people despite the initial expectation of 1,000 participants. The number of applications submitted for participation stood at 4,000, but the organizers had to cut the number, being unprepared for a fourfold increase.

Unexpected as well came the data from the Russian Presidential Envoy to the Far Eastern Federal District, Yuri Trutnev. According to the official, the Forum has resulted in the signing of agreements worth a total of 1.3 trillion rubles (about $18.9 billion).

The event was designed with a view of attracting attention of Russian state actors and businesses as well as international ones to the great social and economic potential of Russia’s Far East and the cooperation of the country with its neighbors in the Asia-Pacific region.

Overall, EEF was visited by 32 official foreign delegations with the largest delegations sent by China, South Korea and Japan. Deputy prime ministers led the delegations of China, Cambodia and Vietnam.

Russia was presented by dozens of high-ranking officials, including President Vladimir Putin, several ministers and governors of nine Far Eastern regions, from the Republic of Sakha (Yakutia) to the Sakhalin Region.

As of business representatives, EEF was visited by top representatives of such international corporations as MazdaMotor, ICBC, MitsubishiCorporation, Mitsui, Kawasaki Heavy Industries, Samsung, Russia’s Rosneft and Gazprom as well as many others.

Over 80 contracts have been signed at EEF, of different scale and importance to the Russian and world economy. They ranged from memorandums of understanding to multi-billion hard contracts.

Deals Worth Around $19 Billion Signed at Eastern Economic Forum
Russia’s hydropower giant RusHydro announced it would invest over $1 billion into the country’s Far East over the next two years. China’s CNPC and Russia’s Rosneft are actively discussing a possible increase of oil supply to China.

There have been dozens of other contracts, mostly on investment in various clusters of the Russian Far East’s economy, from the energy sector and agriculture to fishery and infrastructure construction.

The official EEF opening ceremony took place on Friday, the de-facto second day of the forum. The ceremony’s highlight was a speech by the Russian president who spoke on a wide range of issues – from the economy of the Far East to the geopolitical situation on the Middle East.

Vladimir Putin paid particular attention to the Russian economy. With the ruble losing value against the US dollar after a drop in global oil prices, the Russian Ministry of Economy was forced to reassess its forecast for negative growth in Russia's gross domestic product (GDP) in 2015 to 3.3 percent.

Chinese Companies Accounting for 1/6 of Country's GDP Visit EEF
"The [Russian] government has a number of measures, propositions regarding what and how needs to be done in such conditions. There is nothing unusual for us in this [current economic situation]. We have already gone through such situations in 2008 and 2009 and before that," Putin said in his address.

As for the Far East, the president underlined its particular importance and role in the Asia-Pacific region.

"Today we see the future of the Far East as one of the key centers of social and economic development of the whole country which is to be effectively integrated into the fast-growing Asia-Pacific region as a whole," the president said.

The focus of everyone’s attention at the Forum was a two-pronged strategy of the Russian government for boosting the economic development of Russia’s Far East.

The first aspect was the establishment of advanced special economic zones in Eastern Russia, aimed at reducing risks associated with investment projects and increasing their profitability. The second was the rebirth of free port Vladivostok, the so-called porto franco, with relaxed state regulations on customs, taxation and visa regime.

In an interview to Sputnik, Tatsuo Hatta, President of the Asian Growth Research Institute, said that the creation of Special Economic Zones (SEZ) in Russia was the first step toward overall economic reforms.

Last Day of Eastern Economic Forum to Feature Russian Dialogue With China
Japanese, Korean and Dutch companies told Sputnik they were open for cooperation with Russia, despite the sanctions imposed on Moscow by several Western countries over the Ukraine crisis.

Touching the diamond sector, a Belgian representative of the industry noted that the Russian diamond industry thrived despite the current economic difficulties.

The work of ROTOBO, the Japan Association for Trade with Russia and the Newly Independent States, remains unchanged despite the economic downturn in Russia, the association’s head Shigeru Murayama told Sputnik.

The Economic Forum in Vladivostok was the first event of its kind and of such scale held in Russia’s Far East since sanctions were imposed on the country. According to a Russian official, preparations for the second EEF will begin in October.