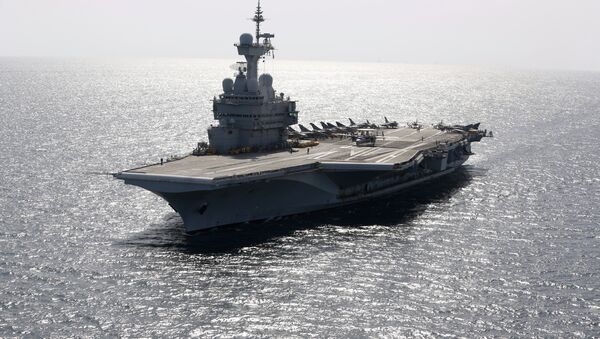 © AFP 2022 / PATRICK BAZ
Subscribe
French President Francois Hollande discussed the issue of expanding France’s operations as part of the US-led coalition against the Islamic State militants on Friday with a defense council, according to media reports.

If Assad Falls, West Will Be Unable to Defeat ISIL –French Politician
According to Le Monde newspaper, French President Francois Hollande discussed the issue of expanding France’s operations as part of the US-led coalition against the Islamic State militants on Friday with a defense council.

France currently only participates in airstrikes in Iraq and supplies arms to the so-called moderate opposition in Syria.

The French position on conducting the airstrikes, according to the newspaper, may be affected by the mass influx of Syrian refugees to Europe, coalition’s failures to curb ISIL advances and possible reinforcement of Russia’s military presence in the region.

On Friday, Russian President Vladimir Putin said that Moscow was providing serious help and equipment to Syria. Russia is ready to intervene in Syria to fight terror, but discussions of this are premature, the Russian president added.

Syria has been mired in civil war since 2011, with the government fighting against many opposition factions and militant groups, such as the Islamic State.

Le Jihad: Nearly Half of European Jihadis in ISIL are French Nationals
Many states, including France, do not believe the Syrian government to be legitimate. An international coalition led by the United States has been launching airstrikes against the ISIL positions in Syria without seeking Damascus’ permission to do so, as well as training and arming the opposition in the country.

Russia, on the other hand, believes Syrian President Bashar Assad to be the legitimate government, and has been supporting the country militarily.

The prolonged armed conflict left hundreds of thousands of Syrians dead and millions displaced. This year, Europe has been dealing with an unprecedented influx of refugees from Syria and other countries in the region, who are seeking a better life.