Week-End Fumbles for Both US Presidential Frontrunners 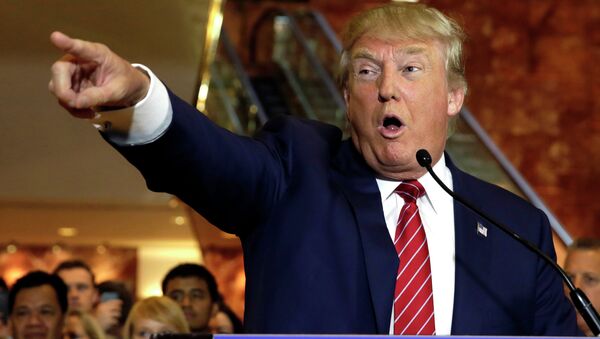 © AP Photo / Richard Drew
Subscribe
International
India
Africa
News this week that Hillary Clinton admitted she did not “stop and think” of the consequences of using private email for official diplomatic correspondence, and of Donald Trump admitting he does not know the difference between Hezbollah and Hamas, is raising doubts on both sides of the aisle that either are prepared for the job they both seek.

Democratic frontrunner Hillary Clinton confessed Friday that when she took the office of secretary of state as the US’ top diplomat, she “was not thinking a lot.”

"You know, I was not thinking a lot when I got in. There was so much work to be done. We had so many problems around the world," Clinton told NBC News. "I didn't really stop and think what kind of email system will there be?"

She continued on to say that she had made a choice, and that it should not reflect on her ability to make good judgements.

"I am very confident that by the time this campaign has run its course, people will know that what I've been saying is accurate," Clinton said.  "They may disagree, as I now disagree, with the choice that I made. But the facts that I have put forth have remained the same."

Republicans argue Clinton only regrets that “bad choice,” which many have pointed out jeopardized sensitive state information, because she got caught.

"What's clear is Hillary Clinton regrets that she got caught and is paying a political price, not the fact her secret email server put our national security at risk," Michael Short, a spokesman for the Republican National Committee, commented to the Guardian.

Meanwhile, Donald Trump joined a discussion on Islamic extremism with conservative talk show host Hugh Hewitt on Thursday, in which he all but admitted having no understanding of Middle East dynamics.

The presidential contender could not identify any of the figures, but asserted that he will learn once “it is appropriate.”  Presidential candidacy apparently is not the time for that.

“So the difference between Hezbollah and Hamas does not matter to you yet, but it will?” Hewitt asked.

“It will when it’s appropriate. I will know more about it than you know, and believe me, it won’t take me long,” Trump boasted.

The Republican frontrunner also confused the Iranian Revolutionary Guard’s Quds Force with the Kurds early on the interview.

“Are you familiar with General Suleimani?” Hewitt asked.
“Yes, but go ahead, give me a little, go ahead, tell me,” Trump fibbed.
“He runs the Quds Forces,” Hewitt informed him.
“Yes, OK, right,” Trump said.
“Do you expect his behaviour …” Hewitt began.
“The Kurds, by the way, have been horribly mistreated by …” Trump interrupted.
“No, not the Kurds, the Quds Forces, the Iranian Revolutionary Guard’s Quds Forces,” Hewitt corrected Trump.
“Yes, yes.”
“… is the bad guys,” Hewitt tried to explain.
“Right.”
“Do you expect his behaviour to change as a result …” Hewitt began again.
“Oh, I thought you said Kurds, Kurds,” Trump interrupted.
“No, Quds,” Hewitt responded.

When asked about his military strategy for a hypothetical conflict between China and Japan, Trump asserted his military plans are not something voters need to know.

You just have to trust him on this one.

“I wouldn’t want to tell you, because frankly, they have to, you know, somebody wrote a very good story about me recently, and they said there’s a certain unpredictable, and it was actually another businessman, said there’s a certain unpredictability about Trump that’s great, and it’s what made him a lot of money and a lot of success,” Trump stumbled. “You don’t want to put, and you don’t want to let people know what you’re going to do with respect to certain things that happen. You don’t want the other side to know.”

“I don’t want to give you an answer to that. If I win, and I’m leading in every single poll, if I win, I don’t want people to know exactly what I’m going to be doing.”

These are your 2016 presidential front runners, United States.