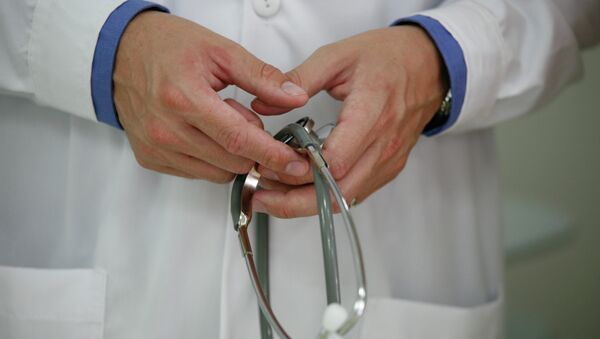 © Flickr / Alex Proimos
Subscribe
As Republican presidential hopeful Donald Trump calls for the mass deportation of the United States’ undocumented immigrants, the American College for Physicians (ACP) has issued a statement cautioning against such a move, saying it will devastate the country’s public health.

Trump to Deport All Undocumented Migrants From United States as President
The ACP, which represents 143,000 internal medicine physicians, related specialists and medical students, issued a statement calling on its members to speak out against plans touted by Trump to deport 12 million undocumented immigrants.  The consequences of this mass deportation would not only have adverse effects on public health, but would also likely increase the level of distrust towards physicians, ACP President Dr. Wayne Riley said.

This isn’t the first time the association has spoken out against deportation. In 2011, it released a position paper in which it noted that while there was a need to reduce unlawful entry to the US, mass deportation could seriously harm the emotional and physical well being of many patients.

The ACP has reiterated this position in light of the political rhetoric being forwarded by Trump, as well as several other Republican contenders.

"Largely missing from the debate over immigration policies has been consideration of the potentially grave impact that large-scale deportation would have on the health of those directly affected, their families, their communities, and an overall US public health," Riley said.

"Numerous studies show that deportation itself, as well as the fear of being deported, causes emotional distress, depression, trauma associated with imposed family separations, and distrust of anyone assumed to be associated with federal, state and local government, including physicians and other health care professionals providing care in publicly-funded hospitals and clinics."

Several cases in the past in which patients were refused treatment by physicians and were then deported due to their undocumented status have already informed a growing distrust in doctors. According to ThinkProgress, 600 undocumented patients were sent back to their home countries between 2007 and 2013 because of a lack of insurance. In one extreme case, a patient who became a quadriplegic after a construction accident was refused prolonged care and deported to Mexico, where he died.

In addition to calling on its members to oppose the plan, the ACP statement noted that its members will continue to treat US-born children of undocumented immigrants as US citizens. This position was taken in response to a number of presidential candidates who have said they would amend legislation granting citizenship to those born to foreign immigrants in the US.

ACP’s vice president of governmental affairs and public policy Robert Doherty added in a separate statement that to treat a patient differently based on their legal status is in itself a violation of the medical profession’s standards of ethics.

Referencing the College’s Ethics Manual, Doherty said "Physicians have an important role to play in promoting health and human rights and addressing social inequities. This includes caring for vulnerable populations such as the uninsured and victims of violence or human rights abuses."