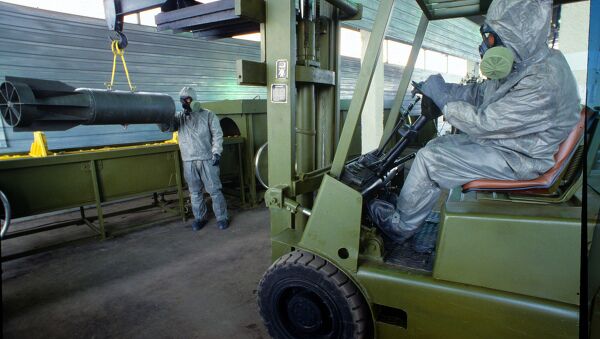 © RIA Novosti
Subscribe
International
India
Africa
Experts claimed that Turkish intelligence agents and scientific pundits might have been embroiled in buying or producing chemical weapons that ISIL used to attack Syria and Iraq.

ISIL Uses Chemical Weapons to Make Up for Defeats in Iraq, Syria - Lawmaker
WASHINGTON (Sputnik) — Turkish intelligence agents and scientific experts might have been involved in helping the ISIL to acquire or produce chemical weapons recently used in attacks in Syria and Iraq, experts told Sputnik.

US authorities have seen reports that the ISIL used a chemical "blistering agent" during clashes in Iraq and Syria earlier this week, and claim they are conducting a "serious" investigation into the incidents.

The United States has consistently blamed Syrian President Bashar Assad’s government for using chemical weapons while downplaying suggestions that opposition forces, including the ISIL, might be culpable.

Veteran’s Today (VT) Senior Editor and security consultant Gordon Duff told Sputnik on Friday that Turkish agents have not only distributed chemical weapons to the ISIL, but have helped the militants manufacture them.

Lethal chemical substances were initially being produced within Turkey itself, Duff said, before they moved operations across the border into Raqqah, Syria, where the ISIL is reportedly headquartered.

In March, Duff added, Syrians captured a Turkish chemical weapons officer at another facility in the region.

Geopolitical analyst and editor Eric Draitser told Sputnik that it was entirely possible Turkish intelligence agents to have supplied chemical weapons to terrorist groups like the al-Nusra Front and the ISIL, either directly or through foreign agents operating on the Syrian-Turkish border.

"Either way, the hands of the Turkish government are not clean," Draitser claimed. "President [Recep Tayyip] Erdogan in Turkey has a lot to answer for."

On Thursday, the Russian Foreign Ministry said it had evidence that the ISIL acquired documentation related to manufacturing chemical weapons.

The ISIL reportedly used chemicals during an attack on the northeastern Syrian town of Marea on Tuesday.

In August, US officials confirmed that mustard gas had been used to attack Kurdish forces fighting the ISIL in northern Iraq.

The Assad government decided to destroy the country’s chemical weapons stockpile after a sarin gas attack near Damascus killed hundreds of people in 2013. The Syrian government and anti-government rebels, which include numerous Islamic extremists, have traded blame for the sarin attack.

At the end of October 2014, international monitors reported that nearly 98 percent of chemical weapons removed from Syria had been destroyed.