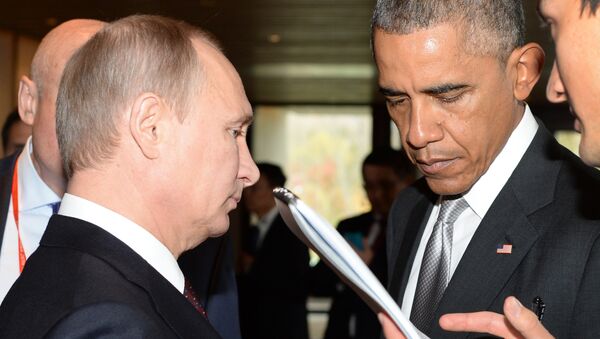 © AFP 2023 / PRESIDENTIAL PRESS SERVICE
Subscribe
International
India
Africa
Asking to the question on issues to be discussed by Putin and Obama in case two leaders meet on the sidelines of the September United Nations General Assembly,the Former US Assistant Secretary of State for Europe claims that it should be Ukraine’s regional autonomy and the country’s future as a non-NATO member 'any time in the near future'.

WASHINGTON (Sputnik), Leandra Bernstein — US and Russian Presidents Barack Obama and Vladimir Putin should discuss Ukraine’s regional autonomy and the country’s future as a non-NATO member, if they meet at the UN this month, former US Assistant Secretary of State for Europe Richard Burt told Sputnik.

"There has to be an understanding at least for the foreseeable future that Ukraine is not going to join NATO," Burt said on Friday when asked what issues Putin and Obama should discuss if they meet in September.

Both Obama and Putin should use their influence on Ukraine’s leadership to help facilitate "more autonomy, decentralization in eastern Ukraine to give the Russian speaking population there the opportunity to take greater local control," Burt added.

Although the official schedule is still being worked out, Obama and Putin may meet on the sidelines of the September United Nations General Assembly, according to officials statements from Moscow.

Putin Explains to Obama Reports of Russian Troops in Ukraine Misleading
If the two leaders meet, it will be their first face-to-face discussion since the 2014 reunification of Crimea with Russia, a significant negative turning point in US-Russia relations.

If Putin and Obama do meet, they should focus on ensuring that Ukraine does not become a member of NATO "any time in the near future," and help Ukraine achieve its objective of increased decentralization, Burt stated.

Addressing these difficult issues will require "real leadership" from Obama and Putin, he stated, commenting that "so far neither one of them has been willing to stick their neck out and exercise that leadership."

In August, Russian Foreign Minister Sergei Lavrov said that a bilateral meeting between Putin and Obama was possible, if the White House initiates steps to organize one. The Obama administration has yet to publicly confirm whether the meeting will take place.

President Putin will be leading the Russian delegation to the UN this month, and is expected to address the General Assembly on September 28 for the first time since 2005.