US Urges China to Boost Domestic Demand as Response to Crisis 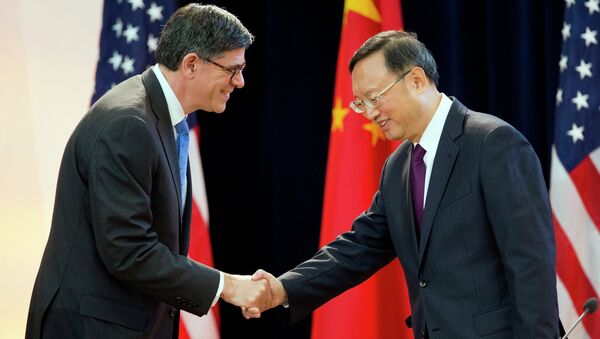 © AP Photo / Pablo Martinez Monsivais
Subscribe
International
India
Africa
The US Department of the Treasury said that the recent talks held between the Chinese Finance Minister and the US Treasury Secretary include number of issues from the Chinese economy' current outlook to the country's actions to financial markets.

China Displacing Monopoly of US Dollar, Bretton Wood System
WASHINGTON (Sputnik) — US Treasury Secretary Jacob Lew held informal talks with Chinese Finance Minister Lou Jiwei on the sidelines of the G-20 Finance Ministers and Central Bank Governors Meeting in Ankara, Turkey, the US Department of the Treasury announced in a readout.

"Secretary Lew and Minister Lou discussed the outlook for the Chinese economy and recent developments in financial markets," the readout, issued on Friday, stated.

The readout said Lew emphasized the importance of China accelerating its transition from export- and investment-led growth to a greater reliance on Chinese households and consumers.

Lew also said that continued progress on economic reform would result in a stronger, more stable, and more balanced Chinese and global economy, which is in China’s and America’s interests, the readout said.

"[He] underscored the importance of China carefully communicating its policy intentions and actions to financial markets," the readout added.

The Treasury Secretary noted the importance of China honoring its commitments to move in an orderly way toward a more market-determined exchange rate system and to increase the transparency of its exchange rate policies.

"Secretary Lew also noted that it was important for China to signal that it will allow market pressures to drive the RMB [renminbi] up as well as down," the readout said.

Chinese President Xi Jinping’s scheduled visit to Washington in September, Lew stated, would provide an opportunity to make progress on issues vital to the Sino-American economic relationship, the readout concluded.