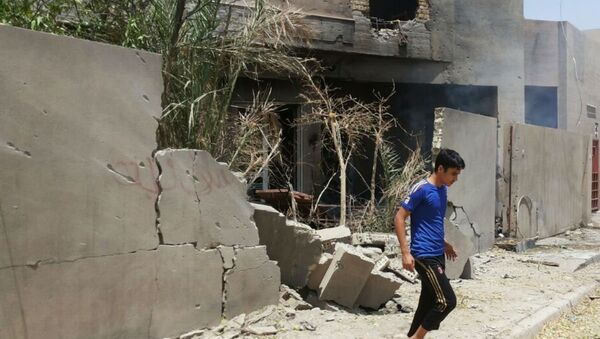 © AP Photo / Uncredited
Subscribe
International
India
Africa
US airstrikes against the self-proclaimed Islamic State terrorist group have already allegedly killed hundreds of civilians in Iraq and Syria. Yet, despite these reports, US central command (CENTCOM) refuses to investigate most of the claims.

Last November, the US military launched an airstrike against an explosives manufacturing facility in Harim City, Syria. The bombing inadvertently killed two children.

"We regret the unintentional loss of lives," Lieutenant General James Terry, head of the US-led military task force fighting IS, said in May. "The coalition continues to take all reasonable measures during the targeting process to mitigate risks to noncombatants."

No compensation was given to the family.

This is the only instance in which the Pentagon has admitted to causing civilian deaths in relation to the 6,500 coalition bombing raids conducted since last August. While US defense officials describe the campaign as the “most precise ever,” multiple NGOs in Syria and Iraq have alleged that 71 of those strikes have resulted civilian casualties.

Last month, nonprofit monitoring group Airwars obtained a CENTCOM document that tracks the number of civilian deaths reported during the bombing campaign. According to the military’s figures, compiled from multiple sources, at least 459 noncombatants have died.

Other organizations have uncovered similar numbers. The Syrian Observatory for Human Rights has compiled its own estimates and found that 162 of nearly 3,000 deaths were civilian.

Yet despite those figures, only 10 of the alleged incidents have been formally investigated by the US military.

"Traditional investigation methods, such as interviewing witnesses and examining the site, are not typically available," CENTCOM spokesman Cmdr Kyle Raines said, according to the Guardian. "We seek to investigate as thoroughly as possible given the limitations."

According to Airwars’ documents, many of the claims are dismissed outright, based on the fact that they relate to coordinates which were simply not targeted.

But far too many are ignored due to "insufficient evidence." One report expressed claims from multiple organizations that a strike in al-Bab last December may have killed 58 individuals being held prisoner by IS. Rather than addressing those concerns immediately, CENTCOM repeatedly refused to even acknowledge that an air raid had occurred.

The US later blamed those strikes on the Syrian government and found "insufficient evidence to determine civcas [civilian casualties]."

CENTCOM even dismissed the claims by IS that a Jordanian air strike was responsible for the death of American hostage Kayla Mueller in February. Reviewing photos sent by the terrorist group, US officials "reported that the allegation was not credible. Analysis of photographs indicates individual was unlikely killed by airstrikes."

"The situation in Iraq and Syria is particularly fraught and getting information out of the areas is a challenge" Airwars project leader Chris Woods told the Guardian. "There just doesn’t seem to be evidence here that the coalition is keeping a genuinely open mind and reassessing as new information comes through."

"When you look at it on a case-by-case basis," he added, "there’s cause for concern here."

Reports of civilian casualties continue to pour in. On Thursday, the Danish Defense Command released a statement that noncombatants had likely been killed during an airstrike last August.

"Danish F-16 jets that are engaged in the fight against ISIL on August 30 carried out an attack on approved targets," the Danish Defense Command said in a statement. "All procedures for the implementation of an attack in relation to the coalition’s guidelines were followed."

It’s also hard to ignore the effect of the regional turmoil on those not physically injured by the bombing campaigns. Unrest has led to massive wave of refugees seeking asylum in Western Europe. While many are travelling through Libya – destabilized since the US-led bombing campaign against the former Gaddafi government – tens of thousands are fleeing the violence in Syria and Iraq. 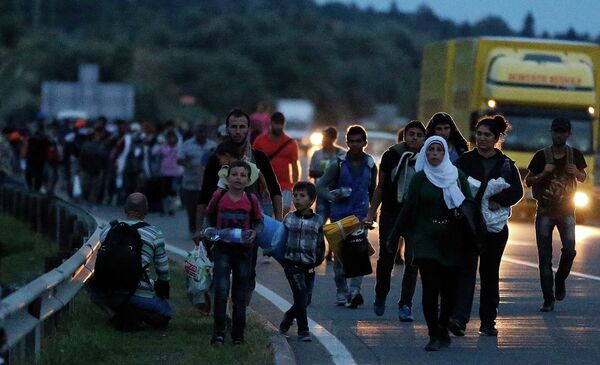 People walk in a long line along the highway near Budapest, Hungary, heading for the Austrian border.
© AP Photo / Frank Augstein

"…The situation with the migrants would never have existed were it not for the destabilization of Syria," Le Pen told France’s TV1 last month. "This is where it all began."

The International Organization for Migration estimates that over 2,400 have died attempting to traverse the Mediterranean.