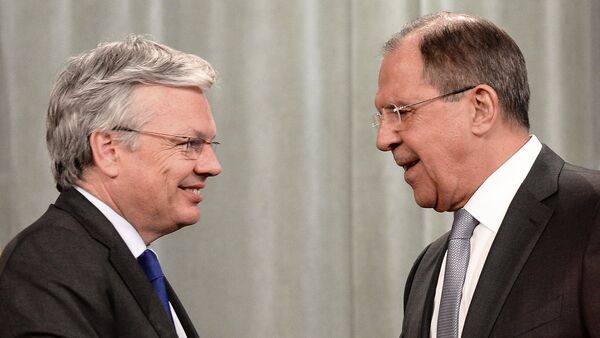 © Sputnik / Vladimir Astapkovich
/
Go to the mediabank
Subscribe
International
India
Africa
Belgian Foreign Minister stated that the European Union is interested in discussing a number of international issues with Russia, which contributed to the Iran Nuclear deal negotiations.

Russia Reserves Right to Respond Adequately to EU Sanctions
LUXEMBOURG (Sputnik) — The European Union is interested in having discussions on a number of international issues with Russia, Belgian Foreign Minister Didier Reynders said on Friday.

Earlier in the day, EU foreign ministers discussed relations with Russia and the states of Eastern Partnership, an EU initiative governing its relationship with the post-Soviet states of Armenia, Azerbaijan, Belarus, Georgia, Moldova, and Ukraine, at an informal meeting.

"I hope that today we can open the discussion of certain issues with Russia. We have watched Russia's participation in the Iran [nuclear deal] negotiations, it is a positive fact. I hope that we will be able to change the situation regarding Syria, perhaps, this will be discussed before the meeting of the UN General Assembly. The are other issues we need to discuss. I think, in particular, the upcoming conference [on climate change], due to be held in Paris at the end of the year," Reynders told reporters following the meeting.

According to the minister, "there is a number of issues requiring a substantial dialogue with Russia."

Russia's relations with the West deteriorated in 2014 over Ukraine crisis. The European Union, the United States and their allies accused Moscow of participating in Ukraine's internal conflict and imposed several rounds of anti-Russia sanctions.

Moscow has repeatedly denied the accusations, expressing readiness to resume dialogue with Western partners, but on terms of mutual respect and cooperation.