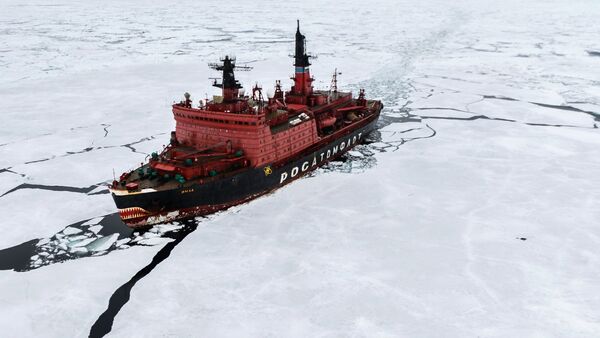 © Sputnik / Valeriy Melnikov
/
Go to the mediabank
Subscribe
International
India
Africa
US State Department Representative to the Arctic stated that Russia has 'reasonable' reasons for a buildup along Arctic as long as it possesses a maritime responsibilities towards the peninsula.

WASHINGTON (Sputnik) — Russia’s buildup along the Arctic is reasonable because of the country’s responsibilities as a maritime nation, US State Department Representative to the Arctic Admiral Robert Papp told journalist on Friday.

"I think, at least from what I’ve seen so far, the activities in terms infrastructure development along the North Sea route have been reasonable. Those [are] things that I think any maritime nation should be doing," Papp said.

Papp noted that Russia has roughly half of the coastline around the Arctic, and the activities it has conducted so far in the region should be expected.

"So it is, in my mind, [it is] reasonable to expect that if you have a maritime route that’s opening — the North Sea route above Russia… the country would be investing in search and rescue stations, improved telecommunications and capabilities for responding to environmental accidents and those such things," he stated.

Pap also noted that he has been encouraging the United States to do the same along the North Slope of Alaska "in preparation for increased human activity."

US to Expand Icebreaker Fleet in Arctic in Attempt to Catch Up With Russia
Russia has been pressing ahead with efforts to develop its Arctic territories, including hydrocarbon production and the development of the North Sea route, which is gaining importance as an alternative to traditional routes from Europe to Asia. Moscow has also boosted its military presence in the area.

Russian President Vladimir Putin has previously stated that Moscow does not plan to militarize the Arctic, but will take the necessary steps to ensure its defense capabilities in the region.

The Arctic shelf is believed to hold enormous deposits of oil and natural gas. Five countries bordering the area are particularly interested in the wealth of the Arctic, including the United States, Canada, Norway, Denmark and Russia.