Poland to Upgrade Navy by Investing $3.4Bln Over Next Decade - PM 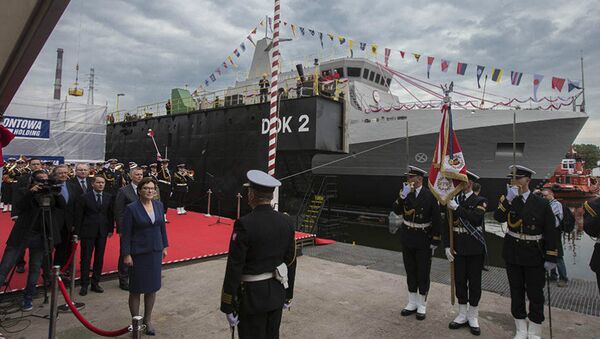 According to Prime Minister, Poland plans to invest the equivalent of $3.4 billion over the next 10 years to modernize its naval forces.

US F-22 Fifth Generation Fighter Jets Seen in Skies Over Poland
WARSAW (Sputnik) – Poland plans to invest the equivalent of $3.4 billion over the next 10 years to modernize its naval forces, Prime Minister Ewa Kopacz said Friday.

"Over the next decade to modernize the Navy (for the operational program ‘Combating threats at sea,’ we will allocate 13.2 billion zlotys," Kopacz said, as quoted by the prime minister’s official website.

Speaking at a ceremony at a shipyard in the northern city of Gdansk, Kopacz said $420 million of the earmarked sum would be spent this year.

The investment is part of Warsaw’s commitment to increase military spending on defense to 2 percent of GDP, as prescribed by the North Atlantic Treaty Organization (NATO).

The Polish leader expressed confidence that the Kormoran II mine hunting vessel, whose christening was on Friday, "will increase the security of shipping routes and marine training grounds."

According to local media, sea trials of the Kormoran II are expected next March and its entry into service with the Polish Navy in November 2016. The prime minister's website said two more Cormorant-class mine hunters are expected by 2022.