Russia is Building a 'New East' in Vladivostok 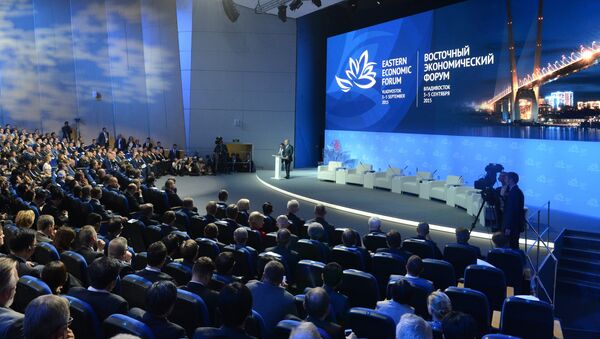 Andrew Korybko
All materials
The first-ever Eastern Economic Forum is a landmark event that speaks to the cooperative nature of multipolarity.

Russian Las Vegas: Plush Entertainment Complex to Be Built in Vladivostok
The Eastern Economic Forum is in full swing, and President Putin just paid a visit there as he returned from nearby Beijing. The gathering of over a thousand political figures, Asian investors, Russian businessmen, and journalists marks the beginning of a new era in East Asian history, whereby the regional powers are showing that they can all work together in pursuit of the same goal — in this case, the development of Russia's resource-rich and geostrategic Far East.

Never before has this happened on the scale that's being seen in Vladivostok, with high-ranking government and trade representatives from China, the two Koreas, Japan, Vietnam, and even Cambodia gathering in Russia's principal Pacific port to talk business.

What makes this all the more symbolic is that some of the participating countries have had public disagreements with one another, yet there's been no sign of tension between them at the forum. All of this is emblematic of the changing nature of international relations, whereby shared prosperity and cooperation in the 21st-century East are trumping the zero-sum games and aggressive rivalry of the 20th-century-and-earlier West.

Russia and its Asian partners have come together in the shared interest of developing the massive Far East region, which when compared to the rest of the Asia-Pacific, is dramatically lacking behind its counterparts in infrastructure, investment, and manufacturing. This is despite it being Russia's leading region for diamond, tin, raw boron, gold, and soybean production, and also having amazing potential for satisfying the agricultural, animal husbandry, and energy needs of the large, yet resource-poor Asian economies.

This double dichotomy between the Far East's resource riches and lack of investment on one hand, and the Asian economies' insatiable resource appetites and vulnerably over-extended supply chains on the other, is what initially brought the two sides together in contemplating cooperation. Seeing as how the gargantuan territory in question only has about 6.3 million inhabitants, yet the plan is for it to provide resources and be a European-destined trade gateway for dozens of times many more people, it can be surmised that all the partners involved intend to build a "New East" in order to fulfill this grand regional ambition.

Celebrities, Investors Flock to Eastern Economic Forum in Vladivostok
In a way, it has thematic overtones of what Western Europe theoretically wanted to accomplish in North America, minus the ethnic cleansing and anthropological destruction, of course. Back then, that corner of the world sought to recreate itself in a somewhat similarly ‘untouched' location, endeavoring to build a "New West" that would embody what it viewed to be its ‘best' defining characteristics. This turned out ‘better' than expected, however, as the innate aggression and zero-sum mentality of the "Old West" came to be epitomized by the United States, which eventually reversed the colonization principle and now controls its prior patron.

What's happening now in the Far East has similar seeds, but will reap a completely different type of fruit. There's no colonization involved, as 21st-century Asia doesn't engage in that ideology, and in place of aggression and selfish mentalities, cooperation and shared prosperity reign. These are the ideals that are taking root along Russia's Pacific Coast, and given how different they are from the ones that were planted along North America's Atlantic Coast over half a millennium ago, there's no doubt that the "New East" will look very different than the "New West" when it finally ripens, which will also be at a way more accelerated pace than its predecessor owing to present-day technological innovations and a radically different global context.

To expedite the creation of the "New East" and facilitate Vladivostok's envisioned role as one of the premier Asian-Pacific transport and logistics hubs, Russia has taken to granting it and the nearby environs free port status. This is basically a special economic zone that greatly increases the ease at which foreign partners can do business. As explained by the forum's website, for example, bureaucracy is noticeably lessened and there's the privilege of "duty-free and tax-free import, storage, and consumption of foreign goods; export of goods (equipment); and import of foreign goods (equipment)". There are also certain tax benefits that aim to seal the deal with investors. Overall, Russia is expecting that this initiative and the deals signed at the event will lead to the doubling of Primorsky Krai's gross regional product by 2025, and that it will grow 3.5 times by 2034, leading to the eventual creation of 85,000 and then 470,000 new jobs, respectively.

Complementary to the free port plans for Vladivostok will be the phased rollout of 9 priority development areas with their own advanced special economic zones (ASEZ). Similar to Vladivostok's status, these will also have expedited bureaucratic procedures and unique tax and investment incentives, but one noticeable difference is that "no permits [will be] required for hiring expats", and that the permits which are distributed will be "issued without taking into account quotas". This basically means that foreign laborers can be sent to the distant but resource-rich reaches of Chukotka, Kamchatka, and Yakutia, or to the closer and more developed territories of Amur, Khabarovsk, and Primorsky, each of which will have their own ASEZs. In the grander scheme of things, Russia is hoping that each of these ASEZs can connect their exports through Vladivostok via maritime or land links, which would then reinforce the city's central role as the country's "Eastern Capital" and main conduit of Asian-Pacific trade.

Russia's plans for the Far East transcend its domestic interests and have a very pivotal international component, which is precisely why its Asian partners are so keen to get involved in developing the region as soon as possible. The "New East" is predicated on building positive connectivity between regions and people (per its creators' civilizational ideals), and as such, it's evident that Vladivostok is intended to become the eastern terminus of the Great Eurasian Bridge.

What's meant by this is that it will be the primary point for Russian-transited trade between the EU and East Asia, mostly via the Trans-Siberian Railroad, which will cut down on travel time between the two commercially active extremities of the supercontinent. Additionally, the tax and labor incentives provided by the free port and its ASEZ counterparts encourage Asian investors to manufacture their goods in Russia and assist in the creation of connective infrastructure to link it to existing EU-destined trade routes.  The same, of course, can also be said for the natural resources that foreign companies extract from Russian territory, such as those located deep in Yakutia, for example.

Alongside the East-West trajectory, there's also a North-South vector that's entirely possible as well. This would connect not only the northern reaches of the Far East to Vladivostok and the Trans-Siberian Railroad, but also enable the coastal city itself to serve as the first node along the Northern Sea Route. This relatively new shipping line runs from Eastern Asia to Western Europe by means of the Arctic Ocean, and it's more convenient for ships to cut through the Sea of Japan on the way than to sail around the Japanese Home Islands.

While it's only active from July-November for the time being and has yet to even scratch its full potential, developing the Arctic Coast in anticipation of the expanded trade and energy flows that are expected to travel alongside it is a priority focus of Russian policy. Accordingly, since Vladivostok is a major maritime and freight destination that's also close to East Asia, it's expected to have an important role in servicing the Northern Sea Route, likely as a storage and manufacturing center per the related incentives associated with its free port status.

With this enhanced understanding of Vladivostok's geostrategic role in boosting European- Asian trade vis-à-vis the Trans-Siberian Railroad and the Northern Sea Route, and coupled with the multipolar and cooperative values of its investment partners, it's easy to see why Russia so confidently feels that the Eastern Economic Forum proves the success of its Pivot to Asia.