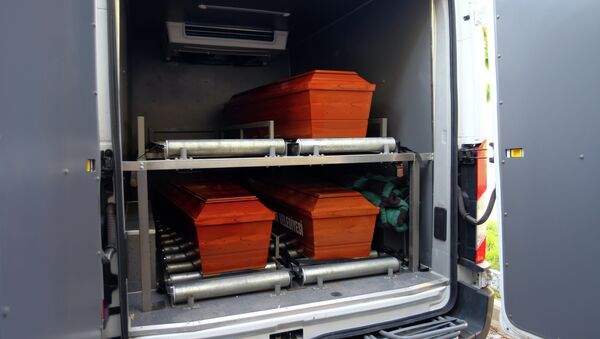 © AP Photo / Emrah Gurel
Subscribe
A drowned Syrian child whose photo was plastered across international media was fleeing ISIL attacks in Kobani, a relative of the family told Sputnik Turkiye.

Photographs of the three-year-old child, whose body shook washed up on the beach of the Turkish city of Bodrum on Wednesday shook the world.

His name was Aylan Kudri. The Kurdi family was registered as living in the village of Begdik in the Kobani region, but for a long time lived in Damascus. The family moved to Aleppo in 2012 because of Syria's civil war, but when the situation there also became heated, the family was forced to move back to their home in Kobani.

Refugee Crisis: Picture Says 1000 Words While EU Leaders Say Nothing‏
After ISIL militants attacked Kobani, the Kurdi family was forced to flee to Turkey. They later returned to liberated Kobani, but after another ISIL attack decided to again cross the Turkish border. After this, the family began its fateful attempt to cross the Mediterranean.

"Abdullah and his family got into the boat which had a total of 11 people in it. Because of high waves, the boat capsized and even people drowned. Of the Kurdi family, only Abdullah was able to save himself," a close relative of the family, Ebdi Kudri told Sputnik Turkiye.

Together with his mother, father, brother Galip, and another 15 or so fellow tribe members attempted to cross the Mediterranean Sea in two boats to reach the Greek island of Kos from Turkey.

The boat the Kurdi family was in capsized as a result of high winds and the people on it were thrown into the open sea. Only his father Abdullah remains alive. He has yet to return to Kobani to bury his relatives.

"Miraculously, [the father] was able to stay alive and swim ashore. He is broken-hearted, to lose all your relatives is the scariest test for a man. Now we are in Bodrum to take away the bodies of the dead. After this we will go to Kobani, where the funeral will take place," Ebdi Kudri added.