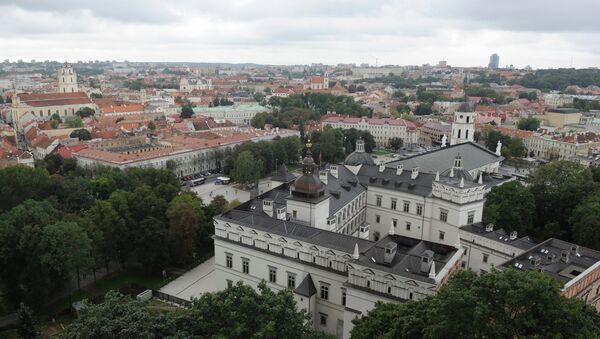 Lithuania Ejects Rights Activists, Brands Them 'National Security Threat'
As Polish Radio explained, strikers are demanding the abolition of several provisions to the 2011 Education Act which they say discriminate against the Polish minority in the country.

Specifically, the strikers call on the government to abolish the unified Lithuanian language exam, made mandatory upon the completion of secondary education in all Lithuanian schools, for the return of a simplified exam for Polish-language students. Strikers are also calling for an increase in funding for minority schools.

One of the organizers of the protest, the Parents' Forum at Polish Schools, put out a statement Wednesday, emphasizing that protest "protest was forced," adding that "we just do not see any other way to draw the authorities' attention to problems in the sphere of education for national minorities." With a series of similar protest actions taking place since June, the protesters vowed that this time, "we will fight until we succeed."

Lithuania's Baltic News Service explained that the country's ethnic Polish students "feel discriminated against in connection with the reorganization of schools for national minorities in Vilnius," a process taking place over the past several years and resulting in the closure of several minority schools due to low attendance.

Lithuania's Cunning Approach to Removing the Memory of Soviet Past
Other students complain that the approximately 800 hours of study time required to prepare for the unified language exam is keeping them back on other subjects. Passing the exam is mandatory for entry into local colleges and universities.

According to Baltic news portal Delfi, the strike has affected at least 61 schools in the Vilnius region thus far. The Polish minority schools were also joined in spirit (and in some instances physically) by their Russian counterparts, with parents from the Russian minority signing an online petition saying that they would 'resolutely defend' the right of their children to be educated in their mother tongue.

Organizing a prayer vigil before the Church of St. Teresa in Vilnius, the protesters prayed that conditions would improve. Marek Kuczynski, the Vice Speaker of Poland's parliament, said that the prayer was a sign of protest, telling local media that "when the authorities do not hear us, we can appeal only to God."

Lithuanian Prime Minister Algirdas Butkevicius immediately stepped out against the strike, saying that he does not "understand completely what reasons led to such irresponsible actions," adding that he considered the move "politicking." Other officials similarly argued that conditions in the country's minority schools, financial and otherwise, are already the best in the European Union.

Lithuania has 51 Polish-language schools, 31 Russian schools, one Belarusian school, and 36 mixed schools. Delfi explained that minority schools have faced a 48 percent decline in attendance over the past 15 years, with Lithuanian schools seeing a similarly catastrophic decline, by 39 percent. At the same time, according to the news site, the number of Polish-language schools has declined by 35 percent, while the number of Lithuanian schools has dropped by 48 percent.

Lithuanian State Security Warns Citizens Against Cooperating With Sputnik
The Polish minority, 200,000-strong, comprises 6.6 percent of the Lithuania's population of 3 million. They are concentrated in the south-eastern region of Vilnius, a region once controlled by Poland before being returned to Lithuania with the assistance of the Soviet army in 1939, shortly before Lithuania itself became a republic of the Soviet Union.

Although perceived discrimination against national minorities is lower in Lithuania than in neighboring Latvia and Estonia, Polish and Russian minorities have nonetheless complained of systemic discrimination by the Lithuanian government over several issues, including the underfunding of minority educational and cultural institutions, the Lithuanization of Polish surnames, and the renaming of street names in several Polish communities. However, unlike Estonia and Latvia, national minorities living in Lithuania were granted citizenship immediately following independence, and do not face the openly discriminatory policy of the 'alien' or 'non-citizen' passports.