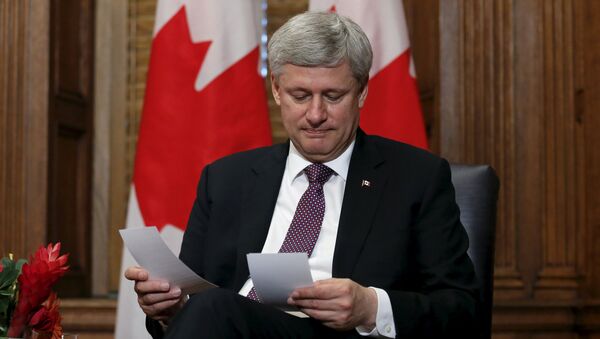 © REUTERS / Chris Wattie
Subscribe
As the migrant crisis continues in Europe, the death of the three-year-old boy whose body was found on a Turkish beach may also highlight Canada’s refusal to welcome refugees.

The boy was identified on Thursday as three-year-old Aylan Kurdi, who was onboard a ship that capsized in the Mediterranean. While Europe has taken much of the criticism for the deaths of refugees like Kudri, Canadian Prime Minister Stephen Harper’s Conservative government is also coming under fire.

"These kids, the older brother could have been going to school next week in Canada. This is hard for everyone. It’s a failure by the international community, it is a failure for Canada," New Democratic leader Thomas Mulcair said during a campaign stop in Toronto, according to Reuters.

According to Mulcair, one of his party members had been actively attempting to file immigration papers on behalf of Kurdi’s family. That application process had been blocked by the department overseen by Conservative Immigration Minister Chris Alexander.

Harper’s administration has come under intense scrutiny for placing increased restrictions on an immigration policy which was previously more welcoming of refugees. While refugees can be sponsored by Canadian residents and organizations, the processing time for such applications can take as long as 45 moths.

Teema Kurdi, the boy’s aunt, moved to Canada 20 years ago. She tried sponsoring Aylan’s family, but with little success.

"I was trying to sponsor them, and I have my friends and my neighbors who helped me with the bank deposits, but we couldn’t get them out, and that is why they went in the boat," she told the Ottawa Citizen.

Parliamentary member Fin Donnelly even told the Canadian Broadcasting Corporation that he hand-delivered a letter to Mr. Alexander back in March, arguing for the Kurdi family.

"I delivered the letter to the minister and – nothing," Donnelly said. "We waited and waited, and we didn’t have any action."

Alexander had previously pledged that his department would accept 23,000 refugees from Iraq and 11,300 from Syria. He also promised to accept an additional 10,000 "persecuted ethnic and religious minorities from the region," according to Reuters.

But figures from his own department show that as of the end of July, only 10% of that quota had been met.

"The tragic photo of young Aylan Kurdi and the news of the death of his brother and mother broke hearts around the world," Alexander said in a statement released on Thursday.

"I am meeting with officials to ascertain both the facts of the case of the Kurdi family and to receive an update on the migrant crisis."

Photos of the young boy emerged on Wednesday. He was fleeing war-torn Syria with his father, mother, and young sibling. Only the father survived, and in total, 12 people lost their lives in the capsizing.