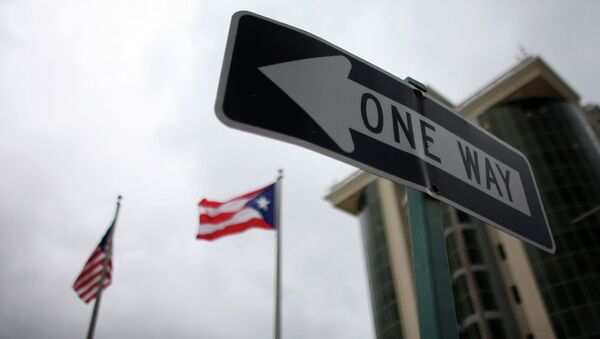 © AP Photo / Ricardo Arduengo
Subscribe
A group in Puerto Rico has launched a campaign to demand that the Caribbean island break all political links with the United States and annex itself once again to Spain.

US Refusal to Rescue Puerto Rico Hurts US International Standing
The Autonomy for Puerto Rico association is not happy about the island’s current status as a “non-incorporated US territory” and wants it to rejoin its onetime mother nation on the other side of the Atlantic, the association’s leader Ivan Arrache told RIA Novosti,

While Catalonia prepares for a vote which its separatist-minded forces see as the first step to independence, many Puerto Ricans are mulling their country’s return to Spain’s fold.

Established in 2012 the Association now has around 30,000 supporters, “both official and unofficial,” Ivan Arrache said.

“We want to become an autonomous community of Spain with a different system of taxation and trade. We want to be with Spain but not blend with it,” he added.

In August 2015 Puerto Rico defaulted on the full payment of its bonds for the first time in the commonwealth government's history.

Puerto Rico paid $628,000 out of a $58 million payment on its Public Finance Corp bonds which were due August 1st.

The government said it was no longer able to service its $73 billion debt.

Washington promised help in the form of  several loans but said that no immediate financial bailout would be forthcoming any time soon.