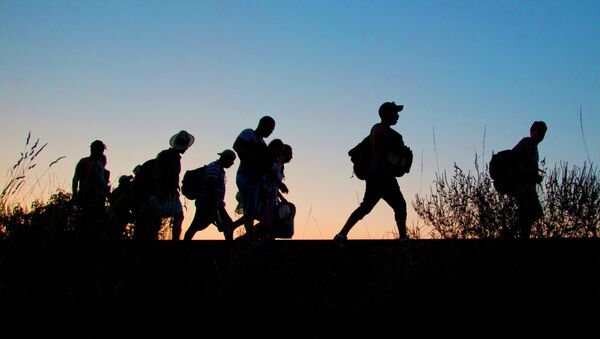 © AP Photo / Darko Bandic
Subscribe
The EU is fighting for balance between its obligations to refugees and public hostility towards immigration. Member States have squabbled all summer over how to respond to the escalating numbers of refugees and asylum seekers arriving on European shores and the numbers dying in the process.

EU governments have so far rejected proposed relocation quotas, while the deteriorating situation across Europe continues and is captured on camera for the world to see. 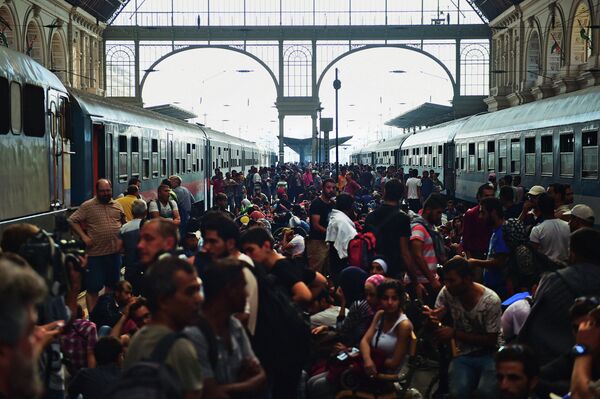 Migrants and refugees crowd the platforms at the Keleti (eastern) railway station in Budapest on September 1, 2015.
© AFP 2022 / ATTILA KISBENEDEK

Exhaustion, exasperation and desperation is turning into anger among the hundreds of people stuck behind iron bars at Hungary's international railway station in Budapest — with reports that refugees intend to protest "for the next day, for the next month, for the next year" and for their whole life. They have been quoted as saying:

"We need our rights… It's not our dream to stay here and sleep on the street."

Meanwhile, scores of migrants on the Greek island, Lesvos, are gathering at a sea port, protesting against poor living conditions they are left to put up with while they wait for documents to enable them to continue with their journey.

"It is unfolding before the eyes of short-sighted European leaders who prioritize securing borders over helping survivors of conflict," says Gauri van Gulik from Amnesty International.

"The world is seeing the worst refugee crisis since the Second World War."

A Eurostar train bound for London had to be stopped while French authorities searched for "trespassers" who had blocked the port in Calais. Passengers tweeted that people were walking on the roof of the train while they waited in the dark for police to arrive.

With almost dramatic irony, passengers complained of having to endure four hours without power in the carriages and without air, making it difficult to breathe.

Recently, 71 men, women and children were found dead in the back of an abandoned truck in Austria. Initial forensic tests carried out on the refugees believed to be from Syria suggest they suffocated to death.

The refugee crisis is causing rifts across the European Union that without resolution could become cavernous. "This crisis… is a crash test for the European institutions in their relations with member states. We must not, through this crisis, follow the road of re-nationalization," Migration and Home Affairs EU Commissioner, Dimitris Avramopoulos, told Reuters.

Germany is accepting a disproportionate share of migrants and has suspended regulations to allow more Syrians to settle there. France has condemned Eastern European members for refusing to take in refugees, in particular Hungary, which has built a razor wire fence on its border with Serbia and is holding refugees back at a Budapest railway station.

Luxembourg, currently holding the EU presidency, has summoned interior ministers from all member states to an extraordinary meeting on September 14 saying: "The situation of migration phenomena outside and inside the European Union has recently taken unprecedented proportions."

350,000 refugees & migrants have arrived in to Europe this year: http://t.co/46KroebPUZ pic.twitter.com/miUmwaWL8d

Ministers in every country are now facing increased moral pressure to do more about the refugee crisis; balancing its obligations with continuing political and public hostility.

Thorbjorn Jagland, secretary general of the Council of Europe said:

"The migration crisis poses a serious threat to the respect for human rights in many parts of Europe."