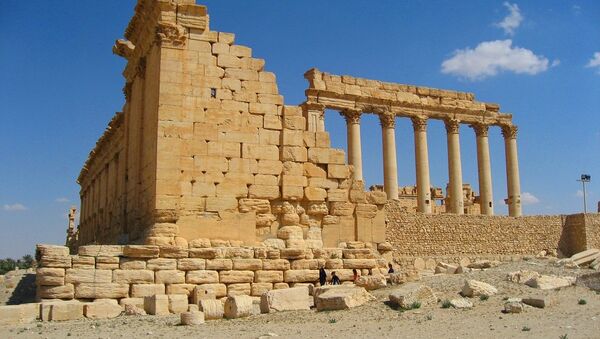 © Flickr / Andrew
Subscribe
International
India
Africa
On top of the heinous crimes against humanity committed by ISIL in the Middle East, the world has been shocked by the senseless destruction of many ancient archaeological sites.

This vandalism has triggered a campaign to try and digitally preserve the region's endangered artifacts for eternity.

Shocked by the recent vandalism and destruction of ancient sites, such as those in the Syrian city of Palmyra, archaeologists from Oxford and Harvard universities are spearheading the 'Million Image Database Project' in the hope of capturing 3D images of some of the Middle East's most at-risk relics and monuments.

By January 2016, the campaign aims to provide 5,000 3D cameras to parts of the Middle East in order to take photos of, and digitally preserve the region's historic artifacts that are deemed to be at risk from conflict or vandalism.

Erin Simmons, archaeologist and director of administration at the Oxford Institute for Digital Archaeology (IDA), told Sputnik that while there had already been plans to create a database of ancient relics, attention was shifted to the Middle East following news of the destruction of various sites by ISIL jihadists.

Deeply saddened by news of Khaled al-Asaad in Palmyra. May those who fight to protect our cultural heritage in the Middle East stay safe.

"It became clear that there was a crisis in the Middle East when it was apparent that there was going to be a systematic destruction of sites and artifacts," she said.

"It changed the direction we were going in with the database which was almost already operational, and we thought that we could help [digitally preserve Middle Eastern artifacts]."

While groups like the IDA have provided cameras and the database, Ms Simmons emphasized that the project would be a joint effort, with various NGOs, museum affiliates and even military personnel expected to take part in capturing photos of the sites.

Palmyra, Temple of Baalshamin. Before and after ISIS. This will bring you to tears. http://t.co/4SMpIVbPp7 pic.twitter.com/MSR28hjr9Z

"It is mostly a collaborative effort. We're working with partners all around the world, including UNESCO, the endangered archaeology of the Middle East and North Africa group at Oxford and other development agencies on the ground."

The cameras will be specially fitted with facilities, which Ms Simmons says will enable users to upload photos to the "Wikipedia-style" content-sharing database, which will then be able to be viewed by not just academics and researchers, but anyone on the Internet.

"The database will operate Wikipedia-style. We've already been contacted by a lot of people who've done research on these sites in the past saying 'Do you want my 2D images? Do you want the article I wrote? Do you want the field notes?'."

This system will allow people to update their own entries on such sites, with those involved in the project hoping that up to one million photographs will be taken over time.

"Every 3D photograph we upload will have a GPS tag and people will be able to add whatever they like that is pertinent and collaborate as well on creating 3D models. The ultimate goal is to preserve as much as possible."

Protect History From Being Erased

Those involved in the campaign hope that the million images project will avoid some sites and ruins from being erased from global memory.

How can we stop #ISIS and the trafficking of our cultural heritage? http://t.co/EK4OWb29wH #Palmyra pic.twitter.com/6a5IM8dDVy

"The attack on these artifacts is systematic. It is an attempt to simply wipe out an aspect of not just western culture, but the breadbasket of the world where humanity first domesticated crops and built the earliest civilizations, and this is an attempt to destroy that history," Ms Simmons said.

"Unfortunately, it is just a case of out of sight, out of mind — a lot of history can be forgotten if we're not reminded of it, and these artifacts are the embodiment of a universal, shared history, and I think what we're fighting for is to preserve that and preserve it in the minds of people."

"The ultimate goal […] is creating awareness, building up the database, letting people know that they have access to it — not just academics and researchers, but anyone…"

The project will be focusing on a number of Middle Eastern countries affected by conflict, including Iraq and Afghanistan.

"Obviously the area that is in the most danger right now is Syria, but we have said clearly that we will not send any collaborators into areas that we don't feel are accessible, and at the moment most sites in Syria are just far too dangerous.

"We're focusing on Iraq and Afghanistan, and we hope to be moving into Yemen… and Turkey — sites on the border of Syria," Ms Simmons said.

While some have questioned the merit of merely taking digital 3D photographs of the ancient sites, Ms Simmons told Sputnik that given the desperate and dangerous nature of the situation in the Middle east, it is the best way to secure at least some form of preservation for some of the world's most vulnerable archaeological ruins.

"The best option would be to physically protect these things, guard sites or remove things. We've had a lot of people question why we're doing this digitally and I think it is our best option at the moment — if we had another option we would be pursuing that one."