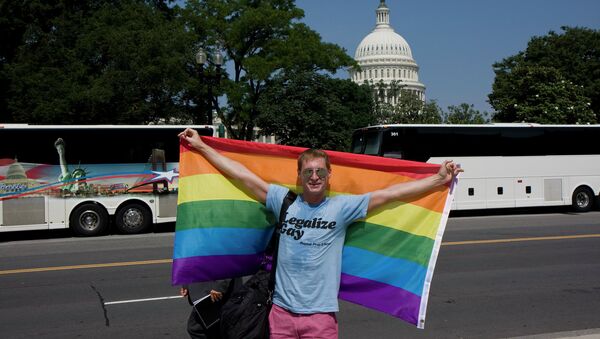 © Flickr / Photo Phiend
Subscribe
In late June the US Supreme Court declared marriage equality a fundamental right in all 50 states. At that time Rowan County, Kentucky Clerk Kim Davis, a Democrat, said that she would not issue licenses to any marriages at all if she had to license them to gay couples as well.

Brad Friedman of Sputnik’s The BradCast radio show plays a clip of the argument between Kim Davis and a couple who had come to her to get their marriage license.

In a statement today following the US Supreme Court's refusal yesterday to hear Davis' application for an “asylum of conscience” and her own refusal, once again today, to issue licenses, she said, “To issue a marriage license which conflicts with God’s definition of marriage, with my name affixed to the certificate, would violate my conscience.”

Defying SCOTUS, Clerk is Still Refusing to Issue Marriage Licenses
In today’s show Brad Friedman talks to the attorney, Joe Dunman, who is the co-counsel to the four couples who are now suing the Rowan County clerk.

“She's not obligated to solemnize a marriage at all. The only thing she has to do is stamp her name on the documents that are filed with the state,” Dunman said regarding Davis’s refusal to issue a license to the couple.

“In her arguments so far, she claims that [by] putting her name on it, she is 'authorizing and blessing' those marriages.”

But the US District Court Judge “disagreed, and said “look, you're just certifying that they meet the legal standards, that they're eligible for a marriage license — that’s all you're doing. You're not blessing anything. For that reason she doesn't have a religious objection. Not to mention that there's no case law to support the idea that public officials have religious rights that trump the civil rights of other people.”

Friedman talks to Dunman about how the case is so fascinating because Davis is essentially standing up to the US Supreme Court.

“Extending her logic outward, there's really no end to what a public official could do. All they'd have to claim that they sincerely believe something, and they just do it,” Dunman explains.

“I want people to imagine a Muslim clerk in Kentucky denying licenses to Christian couples as they walk in the door, and whether or not people would be standing up for 'religious freedom.’”

But Kim Davis is making a ‘religious freedom’ comment as well which Friedman talks about during the show explaining what this means exactly. There are two other counties in the US that are refusing license to gay couples.

000000
Popular comments
A government with a legal foundation in its constitution being the illusion of freedom from God's law is not above God's unchanging laws, even if all its law books say so. I'm glad this clerk remembers what happened in Sodom and Gomorrah. I hope she wakes up the zombies in office that think they govern americans that sodomy is not acceptable or tolerable.
Want2B Wiseguy
3 September 2015, 00:07 GMT
000000
Newsfeed
0
New firstOld first
loader
LIVE
Заголовок открываемого материала
Access to the chat has been blocked for violating the rules . You will be able to participate again through:∞. If you do not agree with the blocking, please use the feedback form
The discussion is closed. You can participate in the discussion within 24 hours after the publication of the article.
To participate in the discussion
log in or register
loader
Chats
Заголовок открываемого материала
Worldwide
InternationalEnglishEnglishMundoEspañolSpanish
Europe
DeutschlandDeutschGermanFranceFrançaisFrenchΕλλάδαΕλληνικάGreekItaliaItalianoItalianČeská republikaČeštinaCzechPolskaPolskiPolishСрбиjаСрпскиSerbianLatvijaLatviešuLatvianLietuvaLietuviųLithuanianMoldovaMoldoveneascăMoldavianБеларусьБеларускiBelarusian
Transcaucasia
ԱրմենիաՀայերենArmenianАҧсныАҧсышәалаAbkhazХуссар ИрыстонИронауОssetianსაქართველოქართულიGeorgianAzərbaycanАzərbaycancaAzerbaijani
Middle East
Sputnik عربيArabicArabicTürkiyeTürkçeTurkishSputnik ایرانPersianPersianSputnik افغانستانDariDari
Central Asia
ҚазақстанҚазақ тіліKazakhКыргызстанКыргызчаKyrgyzOʻzbekistonЎзбекчаUzbekТоҷикистонТоҷикӣTajik
East & Southeast Asia
Việt NamTiếng ViệtVietnamese日本日本語Japanese俄罗斯卫星通讯社中文（简体）Chinese (simplified)俄罗斯卫星通讯社中文（繁体）Chinese (traditional)
South America
BrasilPortuguêsPortuguese
NewsfeedBreaking
07:27 GMTRegistration Cock-Up: Hundreds of Finnish Cars Get Number Plates With Word 'D**k'
07:27 GMTSPD’s Olaf Scholz Declares He Has Mandate to Form New German Government With Greens, FDP
07:26 GMT'Against Established Science': Swedish Doctors Pen Open Letter Against Vaccination of 12-Year-Olds
07:15 GMTTrans Rights Clash in Britain: Conservatives and Labour Can't Decide 'Who Has a Cervix'
07:01 GMTRussia's Security Service Detains Five Neo-Nazis Planning Terror Attack in Bashkiria
06:54 GMTDoctors in Israel 'Angry' at COVID-19 Patients Who Refused Vaccination
06:23 GMTPowerful 6.5-Magnitude Earthquake Strikes Crete, Greece
05:42 GMTBoJo Mulls Scrambling Army to Deliver Fuel Amid Panic Buying Triggered By HGV Driver Shortfall
05:30 GMTGerman Foreign Minister Wins Direct Mandate in Saarlouis District
05:25 GMTNorway's Post-COVID-19 Re-Opening Turns 'Life-Threatening' Amid Drunken Street Fights
05:24 GMTLive Outside Christian Democratic Union HQ After German Elections
04:36 GMTTrump's Georgia Rally: How Could 'Election Fraud' Card Play Out for Republicans in 2022 Midterms?
04:12 GMTNorth Korea's KCNA Labels US 'Most Heinous Human Rights Abuser'
03:00 GMTRome Says G20 Summit on Afghanistan Expected in Coming Weeks
02:51 GMTGermany's Social Democrats Win Election After Gaining 25.7% of Votes
02:24 GMTMerkel's District in Mecklenburg-Western Pomerania Falls Into SPD's Hands
02:17 GMTTexas Gov. Abbott Vows to Employ US Border Patrol Agents Whose Jobs Are 'At Risk' by Biden Admin
02:05 GMT'You F'd Up Your Presidency': Graham Reportedly Blasted Trump After He Refused to Concede Election
01:31 GMTRussian Embassy Calls on US Authorities to Ensure That Yaroshenko Gets Medical Assistance
00:57 GMTIAEA Claims Iran Failed to Fully Honor Agreement on Nuclear Monitoring Equipment