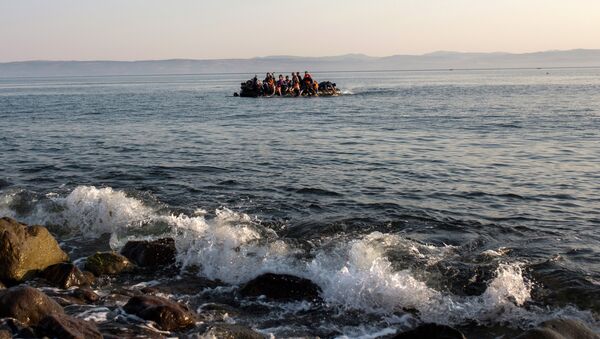 © AP Photo / Santi Palacios
Subscribe
Sweden has welcomed 80,000 refugees this year, which is the largest share among all EU countries relative to its population size.

MOSCOW (Sputnik), Daria Chernyshova — Sweden has a plan for integrating refugees and asylum seekers into the country’s labor market, a press secretary with the Ministry of Employment told Sputnik Wednesday.

“We do have a plan [for] how to make sure the newcomers [asylum seekers that get a permit to stay] should be integrated into the labor market,” Natalie Sial said, without specifying the exact details of the plan.

Sial said that all information regarding public expenditure on refugees will become clear on September 21, when the country’s budget is presented.

Swedish Democrats Say Closing Borders Poor Solution to Migrant Crisis
Swedish Democrats’ immigration spokesman Markus Wiechel told Sputnik earlier this week that the country should hold a referendum on its immigration policies so that taxpayers can show whether they support or reject the extra tax burden they are carrying to pay for these services.

Countries across the European Union are planning to increase their budgets for refugees and asylum seekers, as the 28-nations block is grappling with a major refugee crisis, with thousands of migrants attempting to reach EU member states using various routes, mainly by crossing the Mediterranean Sea.

The Finnish Interior Ministry is planning to double its current expenditure of some 50 million euro on migrant services, as a ministry spokesman confirmed to Sputnik earlier.

German Federal Minister of Labor and Social Affairs Andrea Nahles announced on Tuesday that accommodating refugees would cost the country from 1.8 billion to 3.3 billion euro ($2 billion to $3.7 billion) in 2016.