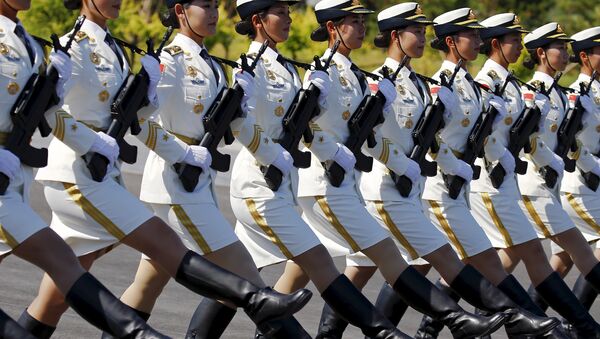 The presidents, prime ministers and high-ranking officials of almost 50 countries will gather in Beijing to take part in the events.

Beijing Prepares to Hold Large Military Parade on Victory Day in September
As the date for the Beijing Victory Parade draws nearer, the White House has pointedly ignored the preparations and the hype. The White House press secretary Josh Earnest said that he knew nothing about the plan of the China’s President Xi Jinping to mark this date by a victory parade and celebration.

The press secretary made this remark at a briefing held on Monday. This remark seems quite pretentious and like an attempt to avoid discussing the matter altogether.

It seems highly unlikely that the spokesman for the US president does not know that about 30 heads of state are about to gather in Beijing on September 3 to jointly celebrate the victory marking the end of WWII. 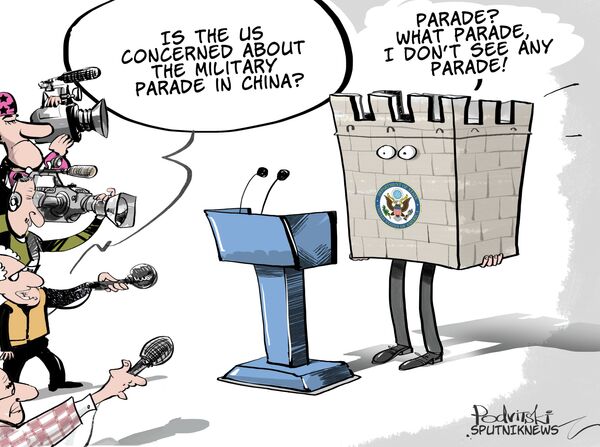 The Importance of Being Earnest
© Sputnik / Vitaly Podvitski

In an interview with Sputnik, the expert from the Center for US Study of the Academy of Social Sciences of China, Tao Venchzhao, said, “I think that it is a kind of a trick, in order to avoid answering. This year marks the 70th anniversary of the victory against fascism. For the countries who understand the importance of this date and first and foremost, for the main allies during this war, it is natural to celebrate the remarkable event together.”

Venchzao further said, “Naturally, China invited the United States to take part in the celebrations. But we know that the American president has a busy schedule and that he may not be able to attend. Chinese President Xi Jinping at the end of September is going to pay a visit to the United States. So in the words of the US press secretary there is some arrogance, but mostly it is a way to dodge the question.”

By Skipping Beijing Parade, West Snubs China's Contribution to WWII Victory
The press secretary must be aware that Russian President Vladimir Putin, the leaders of other SCO countries, as well as the presidents of Pakistan, Vietnam, Mongolia, Myanmar, Egypt, South Africa, Venezuela, Sudan, King of Cambodia and possibly the president of South Korea will also be visiting China.

Josh Earnest certainly should be aware that the UN Secretary General Ban Ki-moon will also be present at the celebrations. And that also Japan — the closest ally of the United States — expressed concern over the visit of Ban Ki-moon, calling it a violation of the neutrality of the United Nations.

On August 28-29 National Security Advisor Susan Rice visited Beijing. Among other things, the 70th anniversary of the victory over Japan in the Pacific War and China's contribution to the defeat of militarist Japan was discussed during all its meetings with the Chinese leaders. Is it possible that John Earnest was not aware of the content of these conversations?

Alexander Voronstov told Sputnik that when the United States, Japan’s and many other Western leaders did not come to Moscow for the Victory Parade on 9 May there was a lot of criticism regarding that in the West.

Many voiced criticism saying that it is one thing when there is a modern conflict – but the historical past, the truth of history — is quite another thing. Many voiced their opinion saying that the leaders should have come to Moscow. Voronstov went on to say that unfortunately, history seems to be repeating itself now with the celebrations in Beijing.

Voronstov said that by coming to the military parade in Beijing the western leaders will be recognizing Beijing's growing confidence in its economic and military power, hence they want to avoid doing that and avoid annoying Japan by making an appearance in Beijing.

Meanwhile, Moscow and Beijing will once again celebrate the victory together. Twice they have demonstrated that they stand united in their position of trying to prevent the events of history from repeating.