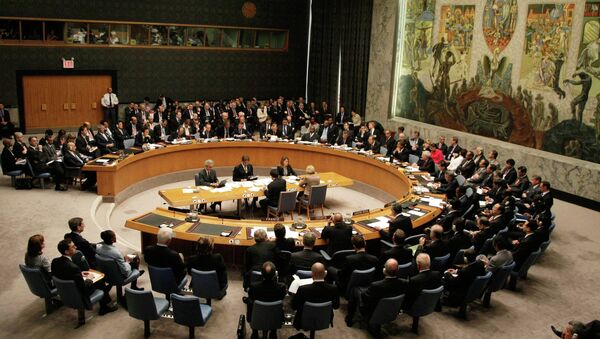 The war on terror and settlement of the ongoing conflicts in the Middle East and North Africa are the issues Russia will focus on as it takes over the rotating presidency of the UN Security Council.

UNSC Resolution on Syria Chemical Weapons to Hinder Further Attacks
On September 30 Foreign Minister Sergei Lavrov will hold a ministerial meeting to discuss these and other issues as part of the 70th session of the UN General Assembly, which opens on September 15.

The meeting will be preceded by a series of workshops to discuss the situation in Libya where the illegal export of oil from rebel-controlled parts of the country has placed the country under international sanctions, which include a ban on the sale of arms to Tripoli.

The UN is expected to extend the mandate of its peacekeeping mission in Libya, which expires on September 15.

Also on the agenda is the ongoing civil war in Syria and an international probe into the use of war chemicals in that country.

As it has been reported Islamic State militants in Iraq have used chemical weapons, Russia will deem it necessary to hold a similar investigation by the team of UN experts now working in Syria.

The Security Council will also look into the situation in the Middle East and the recent developments on the Golan Heights.

Members of the Security Council will oversee the work done by the UN Regional Center of Preventive Diplomacy for Central Asia (UNRCCA).

The Center was established by the UNSC in 2007 to address the growing threat of international terrorism and drug trafficking in Kazakhstan, Kirgizia, Tajikistan, Turkmenia and Uzbekistan.

In September the UNSC will hear a report on Iran’s compliance with the terms of the Joint Comprehensive Plan of Action Tehran signed with the P5+1 (the five permanent members of the UN Security Council plus Germany) and the European Union in Vienna in July.

The situation in Afghanistan, Liberia and Sudan will also be discussed.

The Security Council Presidency rotates monthly among its fifteen members, in alphabetical order. Russia will hand over its presidency to Spain on October 1.