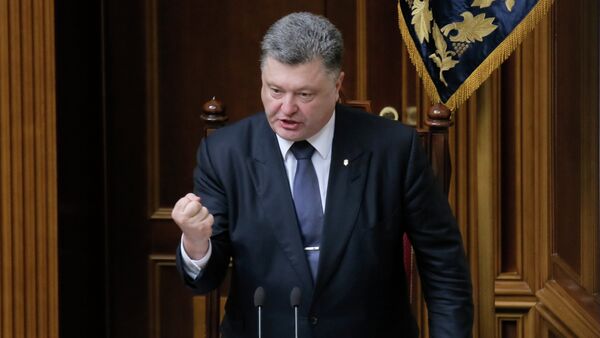 © AP Photo / Efrem Lukatsky
Subscribe
Ukrainian President Petro Poroshenko is becoming increasingly isolated as his political base diminishes due to his reluctance to cater to nationalists, experts told Sputnik on Tuesday.

Poroshenko Claims Kiev's Decentralization Reforms in Line With Minsk Deal
Sapir predicted that the Ukrainian president would become more and more isolated as the row around Ukraine’s decentralization progressed.

Cougars to Patrol Downtown Kiev to Prevent New Riots
"The very violent incidents of Monday August 31st in Kiev seem to mark a turning point both in Ukraine but also in European countries where a growing number of people are becoming aware of the far-right threat in Ukraine," Sapir told Sputnik.