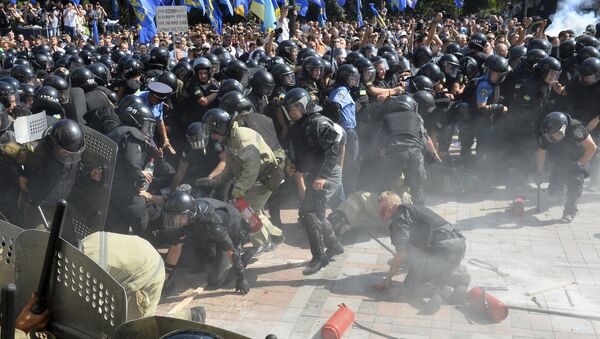 Russian Foreign Minister Sergei Lavrov warned of the dangers of "flirting" with extremists on Tuesday, following Monday's deadly attack outside the Ukrainian parliament in Kiev.

Protesters Attempt to Break Into Ukraine's Parliament, Clash With Police
MOSCOW (Sputnik) — Some 100 people were injured in the clashes and a National Guard soldier was killed, as right-wing Ukrainian nationalists used grenades and firearms during the protest that came shortly after the Ukrainian parliament approved constitutional amendments on decentralization in the country, proposed by President Petro Poroshenko.

During a meeting with students of Moscow State Institute of International Relations, Lavrov said:

"I was watching yesterday what was happening in Ukraine. You know, the Svoboda party extremists are, according to Ukraine's interior minister, responsible for these crimes, for murdering a National Guard employee and wounding dozens of civilians."

"Therefore, one cannot flirt with extremists anywhere, this concerns both Svoboda and the Right Sector," he added.

The violent clashes outside Ukraine's parliament were condemned by the Organization for Security and Co-operation in Europe (OSCE) and the US State Department.