'No to War!' Thousands in Japan Protest Against Using Army Abroad 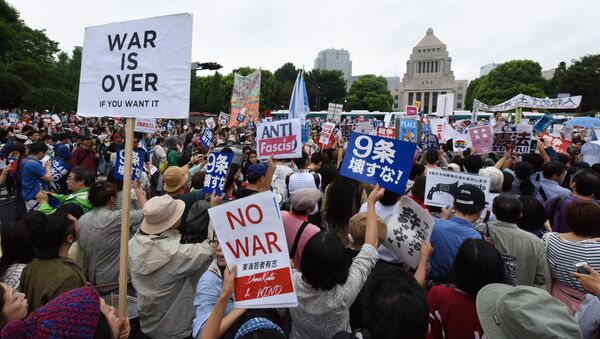 © AFP 2021 / Toru YAMANAKA
Subscribe
One of the largest rallies in recent years was held in Japan on Sunday when thousands of people gathered in front of the national parliament to protest against bills on national security, currently being debated by lawmakers.

Thousands Protest in Japan Against Use of Army Abroad
MOSCOW (Sputnik) — The controversial amendments to the Japanese Constitution to enable Japanese troops to fight abroad for the first time since World War II, are expected to be voted on by the upper house of the Japanese bicameral parliament in mid-September.

According to the protest’s organizers, as quoted by local media, about 120,000 people participated in the rally, urging legislators to reject the bills.

Some protests held banners calling on the country’s prime minister, Shinzo Abe, who has actively lobbied in favor of the controversial legislation, to resign. Others held pacifist posters such as “No War,” “No to War, Yes to Peace,” and “Stop the Security Bills!”

However, local police estimates put the number of participants in the rally at 30,000. The Japan Times reported that Ken Takada, one of the chief organizers of the rally, compared the police reaction and the protest turnout to the rally held against the revision of a Japan-US security treaty in 1960, when some 300,000 people gathered in front of the parliament, while the police said the number was almost three times lower. 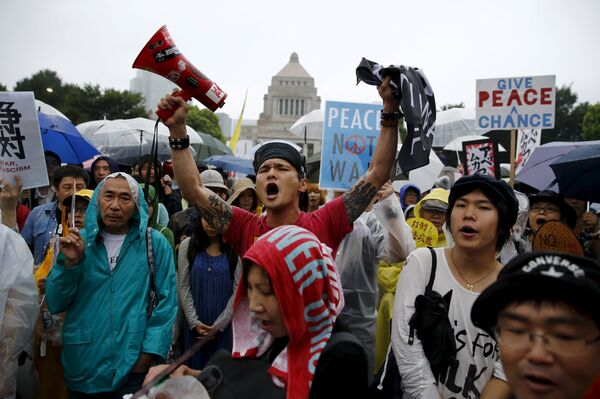 The newspapers emphasized the diversity of the protesters, ranging from the very young to those who witnessed the atrocities of World War II.

“The way the government brushes aside public worries… it’s as though Japan is slipping back into its pre-World War II state,” one of those who gathered in front of parliament, Hiromi Miyasaka, said, as quoted by local media.

This rally is just one of a series of such demonstrations, reflecting the indignation of the country's population aroused by the proposed legislation. Other protests were held on Saturday, when women against the legislation led a protest march across the country. On Thursday, a group of Tokyo university students staged a hunger strike in response to the bills while on Wednesday, academic and citizens groups, as well as a national bar association, joined the protest movement in the capital. 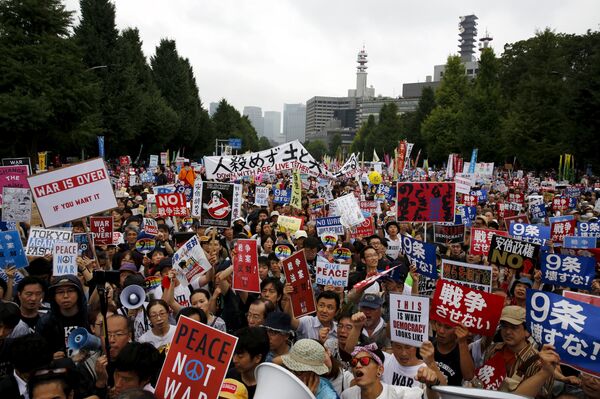 On August 23, residents of 60 various locations across Japan took to the streets calling for the bill to be rejected.

000000
Popular comments
30K protesters??? Laughable -- most probably well over the 100K mark! Abe painted up as Hitler, suits him... Like Hitler he too, won't last... The people have spoken loud and clear against war!! He ignores them at his peril...