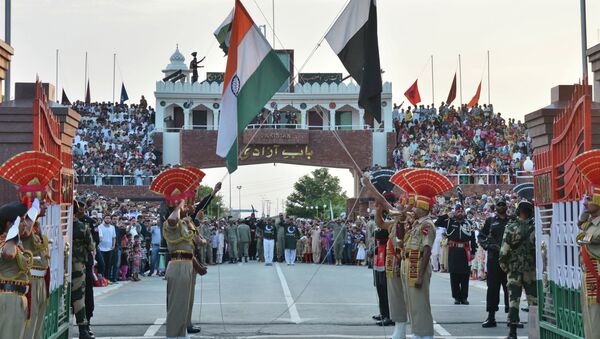 © AP Photo / Prabhjot Gill
Subscribe
International
India
Africa
The possibility of a nuclear arms race between India and Pakistan is highly unlikely even if Pakistan decides to enlarge its own nuclear arsenal significantly in the coming decades, experts and authors of the recent report on Pakistan’s nuclear program told Sputnik on Monday.

MOSCOW (Sputnik), Alexander Mosesov – Last week, the Carnegie Endowment for International Peace and the Stimson Center, two US-based think tanks, published a report entitled "A Normal Nuclear Pakistan." It predicts that if Pakistan continues to grow its nuclear arsenal at the current pace, it will take just ten years for the country to become the world's third-largest nuclear power, after the United States and Russia.

Pakistan Cancels Security Talks With India Over New Delhi 'Preconditions'
While Pakistan currently has the sixth-largest nuclear arsenal in the world, behind the United States, Russia, France, China and the United Kingdom, media quoted a senior Pakistani government official as saying that the report’s projections were "highly exaggerated" and that Pakistan was "a responsible nuclear state, not a reckless one."

According to the data by the Federation of American Scientists (FAS), Pakistan has about 120 warheads at its disposal, while India has about 110. But massive buildup of Pakistan’s nuclear might become a headache for its neighbor India.

US Pushes India, Pakistan Into Nuclear Race Instead of Promoting Peace - NGO
Toby Dalton, Co-Director of the Nuclear Policy Program at the Carnegie Endowment for International Peace and co-author of the Pakistan’s nuclear program report, told Sputnik that there was "a strong inclination toward minimum deterrence" in India.

According to Dalton, this inclination, coming from the country’s political elite, "may dampen technological and military pressures for a larger arsenal."

His colleague and co-author, Michael Krepon, who is also a co-founder of the Stimson Center, noted that whether India would reply with scaling up its own arsenal was an open question.

"Given the history of the US-Soviet competition, we would assume so. But New Delhi doesn't think about nuclear weapons the way we did, and still do," Krepon said.

Speaking about India’s own nuclear strategy, Toby Dalton underlined that it was "not Pakistan-specific, but caters to both Pakistan and China."

"Most of the activity in its nuclear program at this point (testing of long-range ballistic missiles, consideration of MIRVs, develop of SSBNs) is more oriented toward China than Pakistan," Dalton explained.

At the same time, his colleague Michael Krepon noted that the rate of Chinese nuclear arsenal’s growth appeared to be less than Pakistan's. FAS data shows China currently has 250 nuclear warheads at its disposal.

The unlikeliness of India’s answer to Pakistan’s growing arsenal does not mean that New Delhi is unable to answer, Carnegie’s Co-Director of the Nuclear Policy Program Toby Dalton noted.

"India's economic base, as well as its much larger nuclear infrastructure, would allow it to expand its nuclear arsenal in significant ways if it chose to do so," Dalton concluded.

Both India and Pakistan are not parties to the treaty on the Non-Proliferation of Nuclear Weapons (NPT).