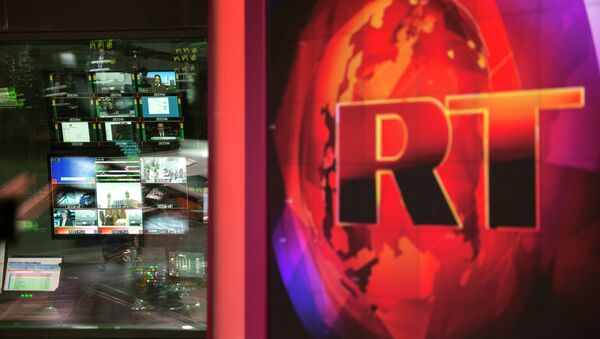 © Sputnik / Evgeny Biyatov
/
Go to the photo bank
Subscribe
RT editor-in-chief Margarita Simonyan said that the blocking of payment was illegal because the TV channel was not subject to anti-Russia sanctions.

Barclays Declares Rossiya Segodnya London Bureau Bank Account ‘Frozen’
MOSCOW (Sputnik) — The British branch of the BBVA bank has blocked a transfer to RT TV channel of funds generated by it through the sale of advertising in the United Kingdom, justifying the move by the fact that the transaction could have an indirect tie to Rossiya Segodnya International Information Agency's Director General Dmitry Kiselev, the channel's press-service said Monday.

"In a letter to Axiom Media company, which sells advertising on RT television channel in the United Kingdom, representatives of the BBVA bank said they can not make the payment as 'similar payments can be accessed by an organization or structure associated with Mr. Dmitry K. Kiselev' despite the fact that Dmitry Kiselev, has no relation to the RT TV channel," the press service said.

"We are extremely outraged by the illegal blocking of a payment to RT in the United Kingdom. Firstly, the account of the Rossiya Segodnya news agency was arrested in London, despite the fact that the agency is not subject to the EU sanctions and the agency's account does not belong to Dmitry Kiselev. Now another bank, without having the slightest legal justification, is refusing to transfer money legally earned by RT," RT and the Rossiya Segodnya International News Agency’s editor-in-chief, Margarita Simonyan, said as quoted by the press service.

Simonyan added that while Kiselev is the director general of Rossiya Segodnya International News Agency, he has no ties to the RT TV channel.

On July 13, the British multinational bank Barclays announced the closure of the bank accounts of Rossiya Segodnya's London bureau. The following day, the bank said that the accounts had not been closed but had instead been frozen, and pointed out that Rossiya Segodnya Director General Dmitry Kiselev features on the list of sanctioned Russian individuals, imposed by the European Union in relation to the Ukrainian conflict.

Kiselev has strongly criticized the British authorities' move, labeling it censorship and direct interference in the work of alternative journalism.