A Parable for Our Dangerous Times 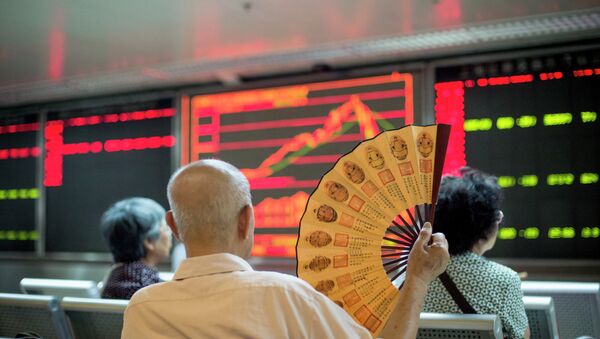 Pepe Escobar
All materials
This is a parable about the new geopolitical new normal.

The parable stars someone who closely interacts with selected Masters of the Universe. Through his business deals, he has no doubt about having identified the way the current high-stakes geopolitical game is being played. That even led him to pen a letter to the People’s Bank of China (PBOC) in Beijing conveying his apprehension.

Heads of Russia, China to Discuss Silk Road Economic Belt in May
Our man in the parable claims access to privileged information confirming what just happened with Chinese stocks involved market manipulation by Wall Street and selected hedge funds to severely disrupt the Russia-China strategic partnership — and consequently destroy the attempt at organizing the Eurasian landmass into a coherent economic union.

He refers of course to the interpenetration of the Chinese-led New Silk Roads, or “One Belt, One Road”, as they are known in China, and the Russia-led Eurasia Economic Union.

In his letter to the PBOC, he reminded them of what they already know; how China’s GDP has grown six fold from 2000 to 2015. And how “One Belt, One Road” could yield a three-to-six fold GDP increase over the next 15 years. His clincher: this is what the United States seeks to disrupt, indirectly.

He reminded the PBOC how Washington/Wall Street crashed the oil price and the ruble through selected traders and the cooperation of the Persian Gulf petromonarchies, which pumped surplus production capacity on the market, thus crashing the oil price. And how this process placed enormous pressure on Moscow.

And yet now there is a major negotiation going on between Moscow and the House of Saud aiming for a compromise on Syria. An eventual success would imply a geopolitical shift of the Persian Gulf petromonarchies towards Moscow and Beijing away from Washington.

The new Eurasian emporium would then have direct access to nearly half the world's oil supply in Russia, Central Asia and the Middle East.

Hear MacArthur raging in the dark

Iran, meanwhile, is solidifying its strategic partnership with China.

The head of Iran’s Atomic Energy Organization, Ali Akbar Salehi, has been in Beijing to expand civilian nuclear cooperation. That includes the redesigning of Iran’s Arak heavy water reactor and the construction of several small ACP100 nuclear reactors. The ACP100 is a Chinese-designed multi-purpose modular reactor.

Meanwhile, Iran’s Export Development Bank is about to cooperate with the Bank of China on funding multiple Iranian projects.

Our man in the parable is sure that if the Masters of the Universe are eventually able to break up the Eurasian landmass – and that includes luring Iran away from both Russia and China – it’s because they have been successful in balancing Germany and the EU-NATO against Russia, and Japan against China.

That is why the Masters of the Universe have allowed the 68% depreciation of the yen; to damage China and build up Japan. That explains why they hollered when the Chinese yuan depreciated slightly in the past few days but were highly enthusiastic about Japan’s quantitative easing (QE).

Our man in the parable added that the saber rattling over the South China Sea is designed for extra pressure on China. Those rocks were strategically important to the US at the time of General MacArthur to extend the American defense perimeter outward.

However, Chinese ICBMs – the latest generation of which will be presented this week at the military parade celebrating the 70th anniversary of the end of WWII in Asia-Pacific – are a game-changer, as well as silent submarines carrying nuclear tipped cruise missiles. These offshore islands have become insignificant to the defense of the US homeland.

Our man in the parable very well knows that the Chinese know it: how an economy that was growing 7% in the last quarter can possibly, suddenly, face Armageddon.

Europe May Suffer Significant Losses if China Launches Currency War
So our man in the parable concludes that the really underlying rationale for the Masters of the Universe’s strategy is similar to one of Churchill's justifications for the First World War: to destroy Germany as an industrial competitor.

The same applied related to Japan. As the sun rose too high, Washington gave the orders to the Japanese Central Bank to contract; and so Japan has shown hardly any growth in twenty years. Neoliberalism subsequently bet all its chips on China. If China became too big, then its wings would also have to be necessarily clipped.

And this is what our man in the parable sees in the making now.

So here’s the parable of a player perched in a privileged position in Gotham City but worried enough to write to the People’s Bank of China to convey his geopolitical fears. We don’t know if or how the PBOC will answer the letter. What is certain is that they could not possibly disagree with how the parable ends; with the “magnificent” Eurasian integration plan full steam – rather, high-speed railing – ahead.