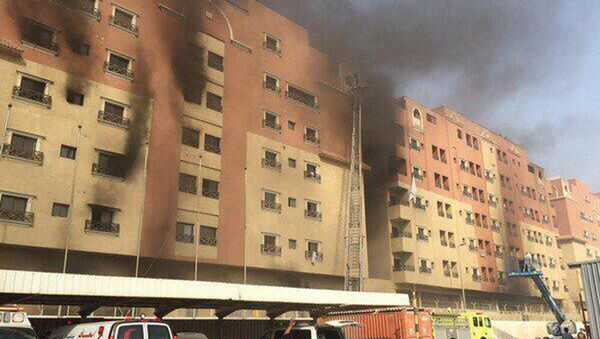 The number of people who have died in a fire at the Saudi Arabian oil worker residential complex in the city of Khobar on Sunday has risen to 11, with 219 people injured, the Al Arabiya reported citing local authorities.

MOSCOW (Sputnik) — Earlier in the day, a fire broke out in the basement of the Radium Residential Complex in the city of Khobar in Saudi Arabia's Eastern Province. The compound is a housing facility for workers from the national petroleum and natural gas company Saudi Aramco.

"The number of cases rose to two deaths and 105 injuries, including a number of critical situations," the Saudi Civil Defense said via its Twitter account.

Saudi Arabia Cutting Billions From the Budget as Oil Prices Tumble
Civil defense authorities said rescue teams were sent to the site and an evacuation was underway, but heavy smoke was hampering the process.

Earlier it was reported that some 70 people had been affected by the fire.

The affected compound consists of eight six-story buildings containing 486 residential units, according to the company website.