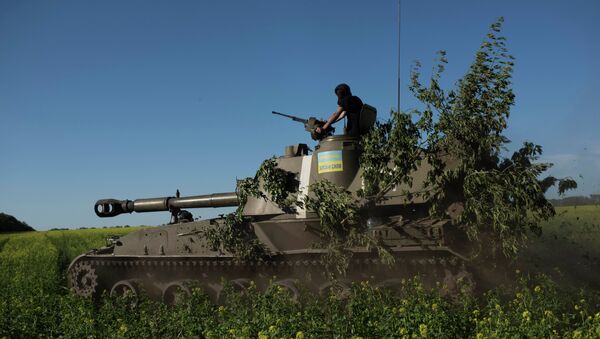 The leaders of France, Germany and Russia called for establishing a ceasefire in Donbass by September 1. They also underscored the importance to withdraw heavy weapons with a caliber of over 100mm from the line of contact.

Where’s My Money? Half of Ukraine’s GDP Lost Due to Underground Economy
PARIS (Sputnik) — Russian President Vladimir Putin, French President Fancois Hollande and German Chancellor Angela Merkel urged on Saturday to put an end to fighting in eastern Ukraine by September 1, the Elysee Palace said in a statement Saturday.

"They strongly supported calls for a full ceasefire starting on September 1 due to the start of a new school year… They underscored the importance of continued ceasefire, citing the plight of civilians in eastern Ukraine," the statement said.

The leaders of the three countries also stressed that heavy weapons with a caliber of over 100mm should be pulled away from the line of contact as soon as possible and called the upcoming local elections in Ukraine on October 25 "an important step toward the implementation of Minsk accords," according to the statement.

Odessa Citizens Point Finger at Kiev for Unleashing War in Donbass - Poll
In February, the heads of Russia, France, Germany and Ukraine signed a 13-point peace deal in Minsk on Ukrainian reconciliation. It stipulated that heavy artillery over 100mm in caliber should be withdrawn from the line of contact in eastern Ukraine to create a 18-mile buffer zone by the end of February. This target was not met, with both Kiev forces and Donbass militia accusing each other of violating the truce.

In July, the four leaders agreed that artillery with a caliber below 100mm should also be pulled away from the region to forward the peace process.

According to the UN estimates, more than 6,800 people have been killed in the Ukrainian conflict since its start in spring 2014.