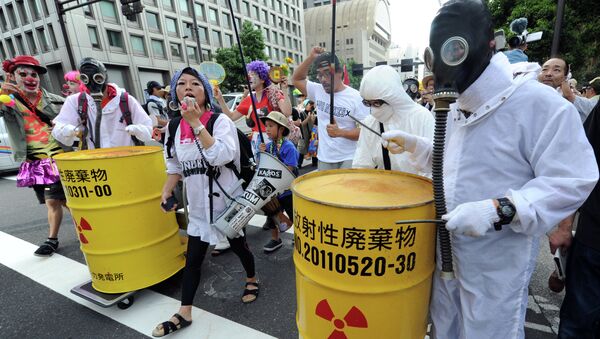 Some 2,700 Japanese protested against Tokyo's plans to bury Fukushima radioactive waste in the town of Shioya.

Unspoken Death Toll of Fukushima: Nuclear Disaster Killing Japanese Slowly
TOKYO (Sputnik) — Thousands of residents in a Japanese town of Shioya, in the Tochigi prefecture, rallied against the government’s plan on Saturday to build a facility there for the disposal of radioactive waste from the crippled Fukushima nuclear plant, according to local media.

Authorities plan to bury the waste in landfills at 170 sites across the country. But the initiative has met staunch opposition from local residents, including Hirobumi Inomata, the mayor of Kami, which is another designated site in the Miyagi prefecture, according to the Japanese Times Newspaper.

Some 2,700 people from the town and nearby villages took to the streets of Shioya on Saturday, the outlet said. They signed a petition against the construction of landfills.

Fukushima Daiichi nuclear power plant was severely damaged in March 2011 after being hit by a 46-foot tsunami triggered by a massive offshore earthquake. Three of its six reactors went into meltdown, resulting in the release of radiation into the atmosphere, soil and sea.