What's the Venezuela-Colombia Border Crisis All About? 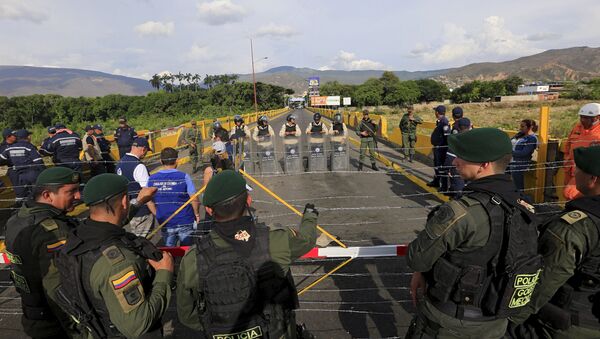 As the diplomatic dispute between Venezuela and Colombia continues to escalate following the closure of the border earlier this month, with Bogota and Caracas announcing the recall of their respective ambassadors on Thursday, Sputnik tries to get to the bottom of the growingly bitter conflict between the two countries.

Venezuela, Colombia Recall Envoys Amid Border Tensions
The conflict ostensibly began earlier this month, when Venezuelan President Nicolas Maduro ordered the closure of Venezuela's long and porous border with Colombia after gunmen opened fire on a border guard patrol carrying out an anti-smuggling operation, critically wounding three soldiers and a civilian. The president also declared a temporary, 60 day 'state of exception' in the Venezuelan border state of Tachira, a term since defined by Venezuelan officials as being similar to a state of emergency, but without the measure of rescinding human rights.

Colombian President Juan Manuel Santos fired back, demanding that Venezuela reopen the border, suggesting that Maduro's response was overly aggressive, and noting that Caracas should have tried "more effective collaboration with Colombian authorities." However, following an outburst of further violence in the border area, including an attack on a Colombian border patrol unit last week, Bogota too shut its side of the border.

In a televised address on Thursday, Santos declared that he had taken the measure of recalling Colombia's ambassador to Venezuela. Venezuelan officials responded in kind. Moreover, Santos instructed Colombian Foreign Minister Angela Holguin, who had met with her Venezuelan counterpart to discuss the border issue only a day earlier, to convene an extraordinary meeting of the Union of South American Nations (UNASUR), aimed at telling "the world what is happening," and at addressing "the issue of abuses that have been committed against Colombians deported from Venezuela."

President Santos vented that his government would not "allow Venezuela to treat Colombia and Colombians this way," stating that the deportees were "thrown out, as they said to me, like dogs."

Colombia's Santos Urges Venezuela to Reopen Border Between Countries
Leaving aside Colombian side's brisk diplomatic moves and the president's indignant rhetoric, an analysis of the roots of the crisis actually shows what appears to be a case of Caracas finally losing its nerve after over a decade of tolerating Colombian indifference and even support for phenomena which have contributed toward Venezuela's political, economic and social destabilization.

Commenting on the intensifying border crisis last week following the launching of the operation to secure the border, involving border troops and over 2,000 personnel from Venezuela's armed forces, President Maduro noted that his government's actions were aimed at "seeking to build a new border," adding that "the [present] border is rotten." Throughout the past two weeks, Venezuelan Foreign Minister Delcy Rodriguez reiterated again and again that relations with Colombia are in need of reform, given the serious problems caused by "paramilitary violence" and what she called "economic warfare" resulting from a porous border.

The "paramilitary violence" Rodriguez refers to is the phenomenon of Colombian military gangs operating on the Venezuelan-Colombian border; they are believed responsible for wounding the three Venezuelan border forces earlier this month, and have long been accused by Venezuelan officials of carrying out large-scale illegal operations, from the smuggling of drugs, people and arms into Venezuela, to the smuggling of fixed-price food goods, livestock, and petrol out for resale in Colombia.

In their border cleanup operation, Venezuelan officials have already uncovered dozens of bases used by the paramilitaries. According to Tachira Governor Jose Gregorio Vielma Mora, these include "cellars that were used to torture and rape people in captivity." As Latin American television network TeleSUR has explained in detail, Colombian paramilitaries are also known for their exploitation of minors, with hundreds of children without identification found in the Tachira region being used as 'mules' to cross rivers with smuggled goods, some of them sexually abused.

With paramilitary activity known to have plagued Colombia over the course of many decades, a key aim of the Venezuelan government's border crackdown appears to be to finally ebb the flow of their activities in Venezuela, with officials seeming to have finally lost their nerve about Bogota's inability to control the volatile situation. Earlier this week, President Maduro warned that as many as 30 Colombian paramilitary groups are believed to be operating in Venezuela, vowing that his government would take a "hard line" against the groups, which parasitically feed off the Venezuelan economy and cause violence and social instability in the country's border regions.

In addition to the crackdown on outright paramilitary gangs, Venezuelan authorities have launched censuses of border regions, aimed at deporting undocumented immigrants accused of smuggling price-fixed goods out of Venezuela. With nearly 1,100 undocumented Colombians from border regions deported since the beginning of the operation, and upwards of 6,000 believed to have fled on their own accord, human rights groups including Amnesty International have condemned the operation, suggesting that it constituted a violation of basic human rights.

However, as TeleSUR has explained, the deportations are aimed at curtailing what is a very serious problem in Venezuela's border regions, with Tachara state alone estimated to lose upwards of 40 percent of its price-fixed food goods supply to smuggling and resale in neighboring Colombia, resulting in scarcity and long lines in supermarkets. The television network suggested that upwards of 80 percent of Venezuelans living in regions bordering Colombia approve of the government's measures, as crime declines and scarce goods begin flooding back into the markets.

It remains unclear exactly how many Colombians living in Venezuela will ultimately be affected by the border crackdown, with authorities efforts believed to be focused only on border area migrants accused of trafficking contraband. Venezuelan officials estimate that there may be as many as 5 million Colombians living in Venezuela, and it's highly improbably for Caracas to attempt to systemically discriminate against such a large minority, especially given that Maduro's socialist government has long prided itself on its acceptance of Columbian immigrants fleeing intense political violence in their home country.

Border tensions between the Venezuela and Colombia go beyond the issues of paramilitary gangs and economic problems caused by smuggling. Last year, President Maduro publically declared that he believed that former Colombian President Alvaro Uribe and "criminal elements" associated with him may have been involved in a plot to kill Venezuelan Congressman Robert Serra, who was stabbed to death along with his partner late last year. Serra was one of four high-ranking United Socialist Party officials killed last year, with Caracas saying that they were targeted by groups associated with Colombian and US officials.

Info graphic of Criminal Network of the Extreme Right Wing in #Venezuela pic.twitter.com/pOM11btrUq

Madrid, Bogota, Miami Conspiring Against Venezuela – Maduro
Earlier this month, authorities released a video confession of an extreme right opposition figure accused of plotting to murder the daughter of National Assembly president Diosdado Cabello. In the video, the suspect said that he and his associates had received training near the Colombian border town of Cucuta, together with financial and other forms of assistance from top officials in Colombia and the US.

For over a year now, Maduro's socialist government has accused extreme right-wing militants, in league with ruling groups in Colombia and the United States, including former President Uribe, of attempting to use assassinations and terrorist attacks on infrastructure to overthrow the Venezuelan government, using bases inside Colombia for training and support. How much truth there is in Caracas's accusations toward its neighbor remains to be seen, but the present diplomatic row nonetheless serves as an opportunity for the country to tighten up its border against illegal back-and-forth travel by ultra-right extremists.

Speaking at a meeting with the National Union of Women in Caracas on Thursday, President Maduro placed the blame, and the impetus for change, squarely on the Colombian government's shoulders. The president said that he hoped that Bogota would soon "regain its sanity," and do more to protect its side of the border from the problems affecting the Venezuelan side. "Until that happens, I won't open the border," he vowed.

Only time will tell what the Colombian side's response will be, and just how hard and how long Caracas will be able to continue to strain its security forces in the effort to secure the country's border from the multitude of problems flowing in from the Colombian side.