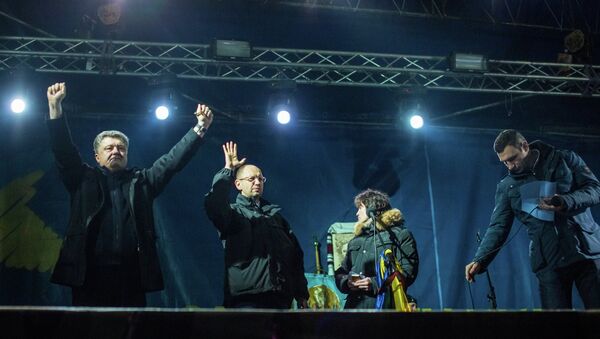 The parties of Ukraine's president and Kiev's mayor merged on Friday while the prime minister's party announced that it would not participate in the upcoming nationwide local elections.

Both Yatsenyuk and Klitschko's parties do not pass the minimum barrier for seats in local legislatures, according to early August opinion polls. Political commentators have called the consolidation an attempt to build a new ruling party, a trend followed by all Ukrainian presidents in the past 21 years.

"It is very important that all democratic parties are united in not allowing a revanche by [deposed former President Viktor] Yanukovych in these elections and to not allow a split in the democratic camp," Yatsenyuk said.

Ukrainian PM Yatsenyuk's People's Front Party to Skip Local Elections
Yatsenyuk added that he intends to continue the existing format of the ruling coalition in Ukraine's legislature, although he did not elaborate whether this would be achieved via a merger between his party and Poroshenko's.

Ukrainian media previously reported on the merger of Yatsenyuk and Poroshenko's parties, but the report was later refuted.

With the new merger, Klitschko has been named the nominal leader of the new party, and would get 30 percent of seats by party lists for most regions in the upcoming elections while Poroshenko's party would get 70 percent in most of Ukraine's regions. Klitschko's party has already participated in the national parliamentary elections as part of Poroshenko's bloc, and the new arrangement would therefore cement the parties' merger.

Poroshenko also hopes to cement the party's future in its association with the European Union by having the new party join the European People's Party.

"I am convinced that very soon, this month, our united party will be accepted into the ranks of the European People's Party," Poroshenko said at the party congress.

Politics for Sale: West Admits Money the Only Power to Matter in Ukraine
Although putting Klitschko in charge of the new party essentially amounts to a merger, members of Klitschko's party will join Poroshenko's party on an individual basis, rather than automatically. A legislator from Poroshenko's party, Ihor Kononenko, also said that it is possible that members of Yatsenyuk's party could participate in the local elections on the Poroshenko Bloc's lists.

The attempt to consolidate political forces around the country's most powerful politicians can also lead to their own downfall, as has been the case in the past, according to Ukrainian journalist Aleksandr Golubov of German international broadcaster Deutsche Welle. Golubov compared the new political union to similar efforts by Ukraine's previous presidents and prime ministers.

"Every time the party which had the greatest access to distributing resources became attractive to situational players with their own, often contradictory interests. Sooner or later these contradictions together with a fall in popularity led to either defeat in elections or mass unrest and subsequent loss of power," he wrote in a commentary for Carnegie Moscow Center.

With local elections less than two months away, the political landscape in Ukraine is still unclear. The most recent poll showed no clear favorite, with Poroshenko's party leading with only 14.9 percent.