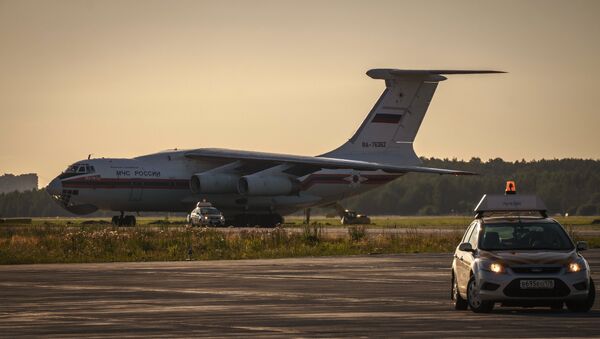 © Sputnik / Alexei Danichev
/
Go to the mediabank
Subscribe
International
India
Africa
Yuri Brazhnikov, who at the time served as Russian EMERCOM's Director for International Activities says that the humanitarian aid provided by Russia to US New Orleans devastated by hurricane Katrina, set in motion practical cooperation between the two countries' rescue services.

Katrina hit southern US states on August 29, 2005, becoming one of the most destructive hurricanes in US history. New Orleans found itself in its epicenter. Almost 80 percent of the city was flooded and many buildings collapsed. More than 1,800 people died in the hurricane and its aftermath.

World
Hurricane Katrina in US : Facts and Background
Russia was among the countries that delivered humanitarian aid to the hurricane-hit city.

"It was a unique operation, the emergency situation in New Orleans was tracked by our National Crisis Management Center. We worked very closely on this disaster and indeed, there was a lot of work for us there," Brazhnikov said.

He added that Russian rescuers even "tracked such details as the location of our students, who were on the roof of a high-rise building."

"We immediately offered our US counterparts to provide assistance including dispatching our IL-76 [heavy military transport aircraft] with a helicopter on board, which would pick up our students from the roof. This our initiative was rejected, but the proposal to provide humanitarian aid was accepted," Brazhnikov pointed out.

The EMERCOM and the US Federal Emergency Management Agency (FEMA) discussed the primary needs of the civilians after which three Russian IL-76 aircraft delivered to the United States more than 60 tons of humanitarian aid, including medical supplies, rations, tents and blankets.

"The experience of cooperation in the wake of such a disaster was critical, and later this experience was applied in many similar emergency situations," Yuri Brazhnikov stressed.

Russia's total expenses on assistance to the hurricane's victims amounted to $2 million.