Sweden to Open Assange Talks With Ecuador Next Week 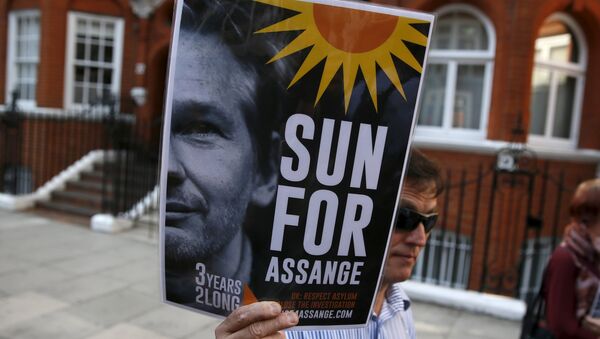 Sweden will move the needle in the impasse with Ecuador over WikiLeaks founder Julian Assange by starting talks on Monday, Swedish officials told a British media outlet Friday.

Assange Urges French President to Adopt Law Protecting Whistleblowers
MOSCOW (Sputnik) – Assange, who has been residing in the Ecuadorian embassy in London for over three years, has been wanted by the Swedish authorities since 2010 for questioning about accusations of unlawful sexual coercion and rape. No formal charges have been made and the statute of limitations in one of the four accusations expired last week.

"It is new ground, very unusual, it is something we try to avoid," Swedish justice official in charge of the Assange case, Cecilia Riddselius, told The Guardian.

Riddselius explained that the talks would go ahead on Monday because "a decision was taken to actually raise it to the level of the cabinet."

She told the publication that Ann Linde, State secretary to Minister for Home Affairs Anders Ygeman at the Ministry of Justice, would open negotiations on behalf of the Swedish authorities.

Riddselius said that while ministerial non-interference in individual cases is a "strict rule" in the Swedish legal system under normal circumstances, a "political decision" had been made in the Assange case.

"We have agreed to what the Ecuadorians asked for. It was a political decision to have this discussion," she told the daily.

WikiLeaks Collects 83% of Reward for TTIP Details Disclosure
Ecuador granted Assange asylum on August 16, 2012, helping him to avoid prosecution in the United States, where he could face multiple espionage charges for leaking classified US documents, if extradited.