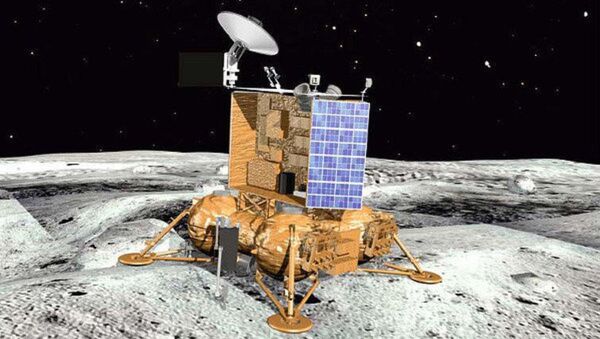 Russia's Space Research Institute is building a space probe to send to the Moon, which will allow Russian scientists to carry out scientific research on the Moon's surface for the first time since unmanned Soviet spacecraft landed there in the 1970s.

Roscosmos to Set Up National Manned Spaceflight Center
The Russian Space Research Institute has given Gazeta.ru an exclusive look at the engineering of the Russian space probe which will be the first to land on the Moon' surface since 1976, and give Russia's researchers the opportunity to explore  the Moon' surface in depth.

"The main difference from Soviet missions, which brought back space material to Earth, is that research will be carried out directly on board the probe," explained Vladislav Tretyakov, a researcher in nuclear planetology at the Russian Space Research Institute [IKI].

"Secondly, we must ensure survival during lunar nights, which back then was only achieved only by our 'Lunokhod' rover."

"And of course, this is the first polar mission, insofar as all the previous missions, including ours and those from other nations, were [conducted] at equatorial latitudes."

Most of the instruments for the spacecraft, named 'Luna-Globe' are being made at the IKI; a life-sized model of the probe is currently being exhibited for visitors to the International Air Show in the Moscow suburb of Zhukovsky.

Russia, Germany Sign Several Space Cooperation Deals
The probe is slated to land in 2016 in the Boguslavsky crater, near the Moon's South Pole, where its four television cameras will immediately begin taking footage of the area. Another two cameras will observe the work of the probe's digging tool and a further two will assist it so that it might move around safely.

In order to survive the harsh nighttime conditions on the Moon, when the temperature can fall from daytime highs of 123 degrees celsius to as low as minus 153 degrees, Luna-Globe is fitted with a radioisotope thermoelectric generator, which provides power by converting the heat generated by the decay of the plutonium-238 isotope into electricity.

The probe's digger, which itself is fitted with an infra-red spectrometer, will hand its findings to the probe's laser mass and neutron gamma spectrometers for analysis.

Another instrument will study the composition of the thin lunar atmosphere, while ceramic plates on the probe will inspect the surface to determine the size, speed, and energy of its dust.

In addition to the instruments built at the IKI, a device made by the Vernadsky Institute of Geochemistry and Analytical Chemistry will study the thermal properties of lunar soil.

Like the 'Lunokhod' and the US Apollo space missions before it, the reflectors which Luna-Globe takes to the Moon will allow mission scientists to track its smallest movements, and in such a way investigate its internal structure.

"This mission is a scientific-technological one. We want to carry out scientific experiments there, but this is a technological mission in the sense that we need to return to the Moon, learn how to land, and survive the lunar night, since a lot of what was achieved in the 1970's has been forgotten," explained Tretyakov.

"We Need to Return to the Moon" — Journalists from gazeta.ru explored the Luna-Globe in detail.

The most important IKI missions were conducted in the 1970s, notably the Venera spacecraft mission series; the Venera ships were the first spacecraft to enter another planet's atmosphere, make a soft landing, and return images and high-res radar mapping studies; Venera remains the only spacecraft to have completed a successful landing on Venus.

In the 1980s and 90s, despite financial difficulties, IKI managed to lead two particularly successful scientific projects; the Interball project to study various plasma processes in the Earth's magnetosphere, and the Granat X-ray and gamma ray astronomy mission to carry out deep imaging of the galactic center and study black hole candidates.

Since the 2000s, the IKI has been involved in a range of international research collaborations, including the Mars Odyssey and Mars Exploration Rovers with NASA, and the Mars Express, Venus Express and INTEGRAL missions, carried out jointly with the European Space Agency.