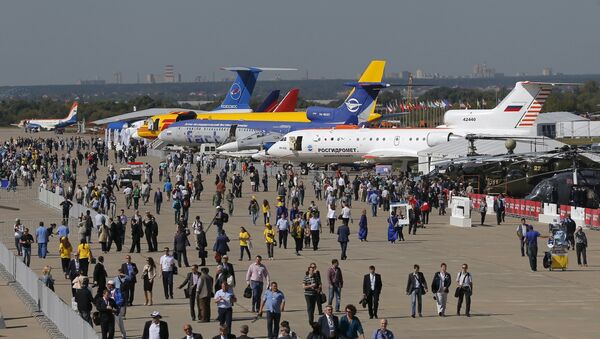 In an interview for Sputnik on the sidelines of the ongoing MAKS-2015 International Aviation and Space Salon, Paris Air Show Chairman Emeric d'Arcimoles expressed his confidence that Russian-French aerospace cooperation will outlast the current difficulties in relations between Moscow and Paris.

D'Arcimoles, who also serves as the Commissioner for International Fairs for France's Aerospace Industries Association, told Sputnik that while Russia and France currently face problems in their diplomatic relations, "the peculiarity of our work is that the industrial cycle is long, while the political cycle is short."

Citing the "rich history of relations" between the Russian and French aerospace industries, D'Arcimoles noted that he is "absolutely confident that the stupidity of our politicians will quickly be forgotten, and that our cooperation will continue."

MAKS-2015 Airshow Enters Third Day, Set to Become Open to Public (VIDEO)
He also stressed that "the French presence at MAKS-2015 confirms" the intensions of his country's aerospace companies, noting that "in terms of numbers, our delegation leaves other countries far behind. This shows that we believe in our strategy, and have faith in the prospects of our business in Russia. We trust our Russian partners. As you well know, one really finds out who one's friends are in times of difficulty."

Commenting the French government's recent decision to cancel the Mistral deal with Russia following a long, drawn out drama over the helicopter carriers, D'Arcimoles noted this situation was abnormal and unacceptable, "but today, the French aviation industry takes into account the potential short-term risk. As far as long-term risk goes, our presence [at MAKS], in spite of all the difficulties, demonstrates that soon all of this will become a memory, and we will continue our cooperation."

Flexible Prospects for Cooperation and Hopes for a Bright Future Ahead

25 Countries Defy Sanctions to Attend MAKS-2015 Air Show
D'Arcimoles explained that French companies are ready to establish and pursue flexible partnership arrangements with their Russian counterparts, emphasizing France's extensive experience and generous R&D resource base. The official recalled that while the Russian aerospace suffered a very large decline in past decades, "now a situation of stability has returned." D'Arcimoles noted that he was confident that "the strong qualifications of Russian engineers will allow them to erase this 'collapse' in development."

Ultimately, D'Arcimoles articulated that "the Russians and the French are very close to one another as peoples, through our history and culture. We are quick to understand one another. As a people we are direct –and some find this shocking; both our peoples are emotional. But our foundation is strong, and on the basis of all our relationships is the desire to work together."

What Did Putin See at MAKS-2015 Air and Space Show?
The MAKS-2015 International Aviation and Space Salon is taking place in the city of Zhukovsky outside Moscow this week. Over 150 foreign companies from 25 countries, as well as more than 600 Russian companies, are participating in the show. On Thursday, MAKS-2015 entered into its third day, and on Friday the general public will be given the opportunity to witness some of Russia's latest aviation technology in action.

D'Arcimoles also said that France sees no problem in continuing to cooperate in the field of aerospace engineering and product manufacturing in Russia.

"Perhaps, the Russian industry will be more demanding. Russia will possibly ask us to work on its soil. We will work on Russian territory. No problem! There are enough small, high-tech companies that are willing to host production, should difficulties arise," he stated.