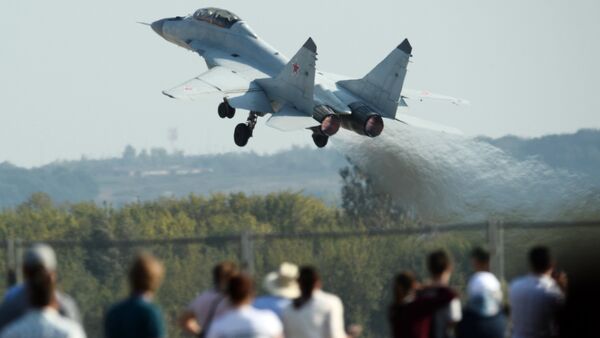 © Sputnik / Maksim Blinov
/
Go to the photo bank
Subscribe
The MAKS-2015 International Air Show in the city of Zhukovsky in the Moscow Region enters its third day on August 27, and will soon give the general public the opportunity to witness Russia’s latest aviation technology.

Defense contractors, state representatives and other industry specialists from 25 countries who attended the event, are due to finalize their numerous deals throughout the day ahead of Friday, when the airshow will open its doors to all those who want to see the event's entertainment program, which features an aerobatics show by Russian pilots.

The first day of the airshow saw, among other events, a demonstration flight by Russia’s latest fighter jet, the fifth generation T-50, also known as PAK FA, touted as a warplane that will provide a worthy adversary to the sophisticated US F-22 Raptor fighter jet.

As for the second day of the show, its main event was the signing of agreement between the Russian Federal Agency Roskosmos and the European Space Agency on the joint launch of their mission to Mars, scheduled for 2018.

Additionally, a number of other important deals were signed, including one for the purchase by Belarus of Russian-made Yak-130 combat training aircraft.